Myanmar farmers going against the grain with apps 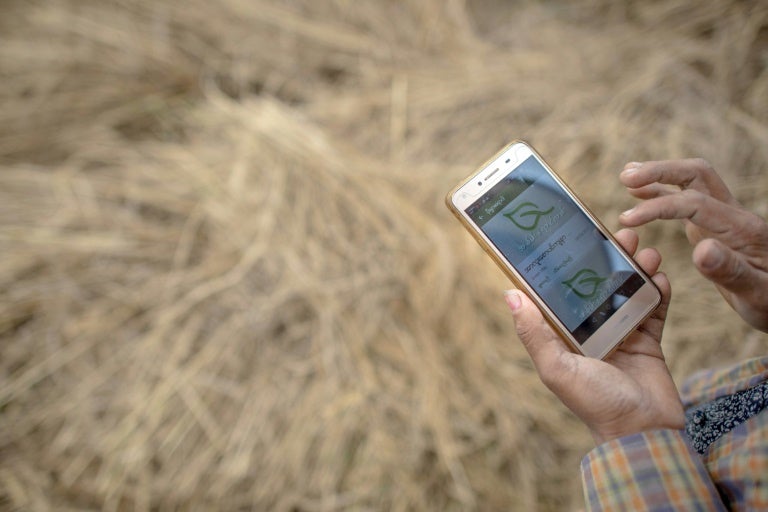 Image: A farmer uses a mobile app while working in a rice field on the outskirts of Yangon. New smartphone apps are providing farmers with up-to-date information on everything from weather, climate change, crop prices to advice on pesticides and fertilizers. Image: Ye Aung THU / AFP

A free app on farmer San San Hla’s smartphone is her new weapon in the war against the dreaded stem borer moth that blighted her rice paddy in southern Myanmar for the last two years.

As she watches her workers haul in this year’s harvest, the 35-year-old is in a triumphant mood, ascribing her victory over the seasonal scourge to advice received via the app about effective pesticide use.

“We used to just farm the way our parents showed us,” she told AFP, in her village of Aye Ywar west of Yangon.

“But after getting the app, I now see how we should be doing it… it’s better to use proper techniques rather than just working blindly.”

San San Hla is among a growing cohort of farmers who are turning to tech to address the knowledge gap in a country where two thirds of the workforce are employed in agriculture.

The sector accounts for some 28 percent of the country’s GDP, but yields are low with farmers cut-off from modern technology under decades of isolationist junta rule.

For people like San San Hla apps could be the answer.

They are providing farmers with up-to-date information on everything from weather, climate change, crop prices to advice on pesticides and fertilizers.

Chat forums are connecting farmers, allowing them to swap tips while experts are on hand to answer queries.

The “Green Way” app is the brainchild of two former agricultural students, who in 2011 set up a website for farmers, often working through the night to keep it updated.

But at the time few farmers had internet access, recalls Yin Yin Phyu, 28, explaining the “idea just didn’t take off.”

Then smartphones arrived and everything changed.

As Myanmar opened its doors, telecoms companies rushed in to grab market share, thrusting Myanmar beyond the era of desktop computers and old-style mobile phones.

The cost of sim cards, once the tightly-controlled reserve of the well-connected, or special branch spies, plummeted from an unattainable $3,000 in 2005 to $1.50 in 2013.

Competitors practically gave away smartphone handsets as they fell over themselves to build up brand loyalty.

Mobile penetration stood at just seven percent in 2012. By the end of 2017, smartphone penetration had rocketed to 80 percent.

A nascent tech hub followed and outside of agriculture, apps were created for everything from healthcare to Myanmar’s parliament.

Farmers, many among the country’s poorest, today find themselves with a mobile computer in their hands — a game-changer for the entrepreneurs behind ‘Green Way,’ who launched their app in 2016 and now employ 18 full-time staff.

“‘Green way’ is my dream to link farmers and experts,” Yin Yin Phyu told AFP. “The farmers can get help whenever they need.”

Some 70,000 farmers have already downloaded the app although she hears far more are accessing it through phone-to-phone sharing. 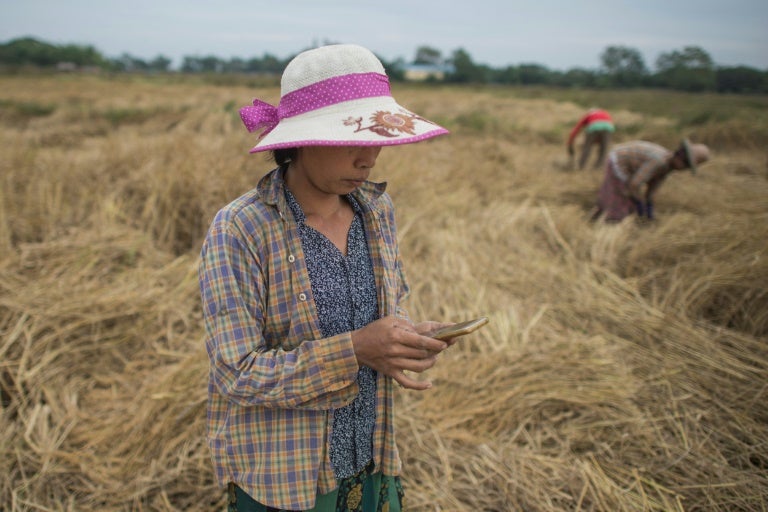 A free app on San San Hla’s smartphone is her new weapon in the war against the dreaded stem borer moth that blighted her rice paddy in southern Myanmar for the last two years. Image: Ye Aung THU / AFP

“Many workers migrate to other countries because they can’t make enough money to live from agriculture in Myanmar,” he says.

A 2017 World Bank study found farmers in some areas of the country still earn as little as $2 per day.

Productivity is also relatively low with only 23kg of rice paddy generated in one day of work in Myanmar compared to 62kg in Cambodia, 429kg in Vietnam, and 547kg in Thailand.

The founder of the “Golden Paddy” app says the new tech is not best suited to struggling farmers at the bottom of the ladder.

They do not have the time or resources to implement advice on changing seeds or fertilizer.

Instead, the apps are aimed at smallholder farmers to allow them to “become a little more commercial,” Dutchman Erwin Sikma explains.

Similar projects in other developing countries – in India and parts of Africa – are still reliant on old-style phones and information by SMS.

Myanmar now has the chance to leapfrog that era to become an agricultural trailblazer.

But that also means the country is in uncharted territory.

“We have a lot of first-mover disadvantages,” Erwin Sikma says.