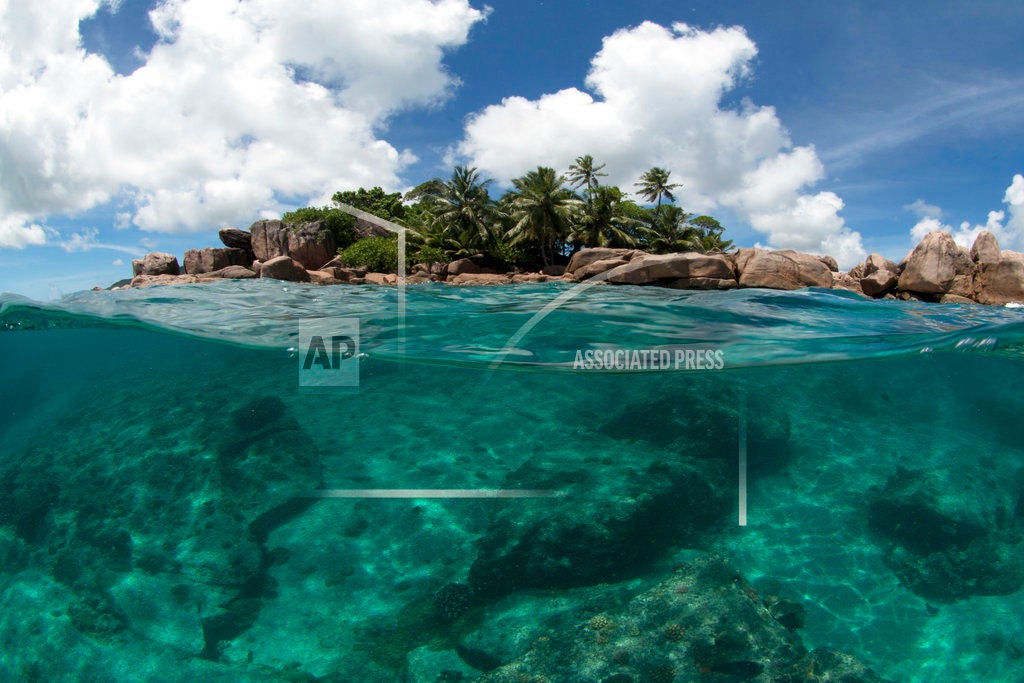 In this photo taken Tuesday, Feb. 20, 2018, a small island is seen above and below the water in the Seychelles. The tiny island nation of the Seychelles is announcing a pioneering marine conservation plan as part of a debt swap deal with creditors, designating nearly a third of its ocean waters as protected areas and aiming to ensure its unique biodiversity. (The Ocean Agency via AP)

In an agreement described as the first of its kind, the Indian Ocean nation popular with tourists is designating nearly a third of its waters as protected areas, aiming to ensure the longevity of its unique biodiversity.

The archipelago’s 115 islands have been isolated by continental land masses for millions of years. The Aldabra atoll, a UNESCO World Heritage Site, is home to the world’s largest population of giant tortoises, critically endangered sea cows and spawning grounds for a number of rare species. But overfishing has hurt.

The government on Wednesday signed a bill restricting nearly all human activity in the waters around Aldabra and overall setting aside more than 210,000 square kilometers (81,081 sq. miles) as protected areas. The areas around Aldabra will ban all extractive uses such as fishing and petroleum exploration; the rest will be restricted to sustainable practices. The plan will be completed by 2021.

“A great honor and privilege,” the country’s environment minister, Didier Dogley, said at the signing.

The deal with the country’s creditors was brokered by U.S.-based The Nature Conservancy and involved a $1 million grant by the foundation of actor Leonardo DiCaprio.

At the height of its debt crisis in the late 2000s, the Seychelles was one of the world’s top debt-ridden countries. Its sovereign debt peaked at nearly $1 billion, according to the World Bank. Today the debt stands at less than half of that, according to the finance ministry.

The deal allows for a certain amount of money to be repaid into a trust fund to support conservation-related projects, organizers said.

While welcoming the deal, the CEO of the Seychelles National Parks Authority warned that certain threats to the Seychelles remain beyond control. “Like climate, for example,” Flavien Joubert said.

The new agreement has worried some who say their livelihoods will be severely restricted.

“If you protect everywhere, where (will) we go fishing?” Elvis Simon Dingwall said. He echoed others who said they have to bear the brunt of the government’s past economic failures.

The head of the Seychelles’ state-owned oil and gas exploration entity, Patrick Joseph, said Petro Seychelles initially was resistant to the plan but now is cautiously optimistic.

“Provided this is done properly, we choose the right companies and we do a proper impact assessment before we drill, I feel like the country will definitely benefit from oil and gas resources,” Joseph said.

The Seychellois government is already benefiting from the confidence the deal has inspired in its creditors, with a separate bond deal now being finalized with the World Bank to help finance a transition to sustainable fisheries.

“The Seychelles is leading the way in terms of how it is going to manage its ocean territory … in a sustainable fashion,” said Benoit Bosquet, the World Bank’s practice manager for environment and natural resources.    /muf