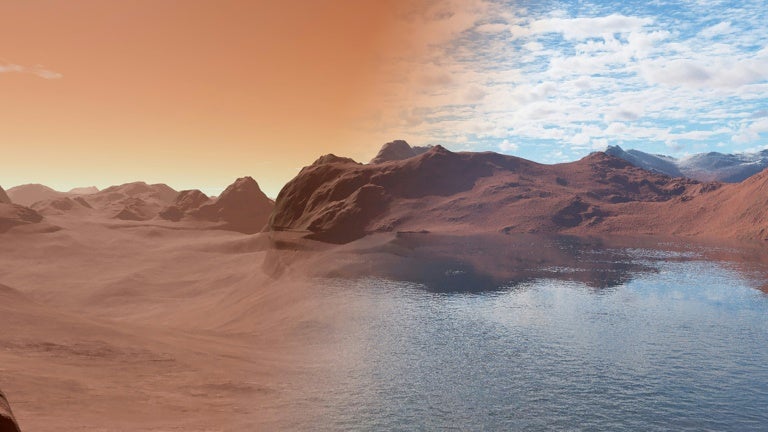 An image comparing the current landscape of Mars (left) and how it may have looked when covered with lakes and oceans billions of years ago. (© Jon WADE, James MOORE – NATURE PUBLISHING GROUP/AFP FILE PHOTO)

It may rain once a decade or less in South America’s Atacama Desert but tiny bacteria and microorganisms survive there, hinting at the possibility of similar life on Mars, researchers said on Monday.

The desert, which spans parts of Chile and Peru, is the driest non-polar desert on Earth and may contain the environment most like that of the Red Planet, said the report in the Proceedings of the National Academy of Sciences (PNAS).

Lead researcher Dirk Schulze-Makuch, a professor and planetary scientist at the Technical University of Berlin, and colleagues took a trip to the desert in 2015 to learn more about what kind of life might exist there.

Then, unexpectedly, it rained.

Scientists detected an explosion of biological activity in the soil, and quickly began using sterile spoons to scoop up samples.

Genomic analyses helped identify the several apparently indigenous species of microbial life – mostly bacteria – that had somehow adapted to live in the harsh environment by lying dormant for years, then re-animating and reproducing once it rained.

“In the past, researchers have found dying organisms near the surface and remnants of DNA, but this is really the first time that anyone has been able to identify a persistent form of life living in the soil of the Atacama Desert,” Schulze-Makuch said.

“We believe these microbial communities can lay dormant for hundreds or even thousands of years in conditions very similar to what you would find on a planet like Mars and then come back to life when it rains,” Schulze-Makuch added.

Scientists returned to the Atacama in 2016 and 2017 for follow-up visits, and discovered that the same microbial communities in the soil were gradually reverting to their dormant state.

But they did not completely die off. Single-celled organisms, found mainly in the deeper layers of the desert, “have formed active communities for millions of years and have evolved to cope with the harsh conditions,” said the PNAS report.

Since Mars had oceans and lakes billions of years ago, researchers said early life forms may have thrived there, too. 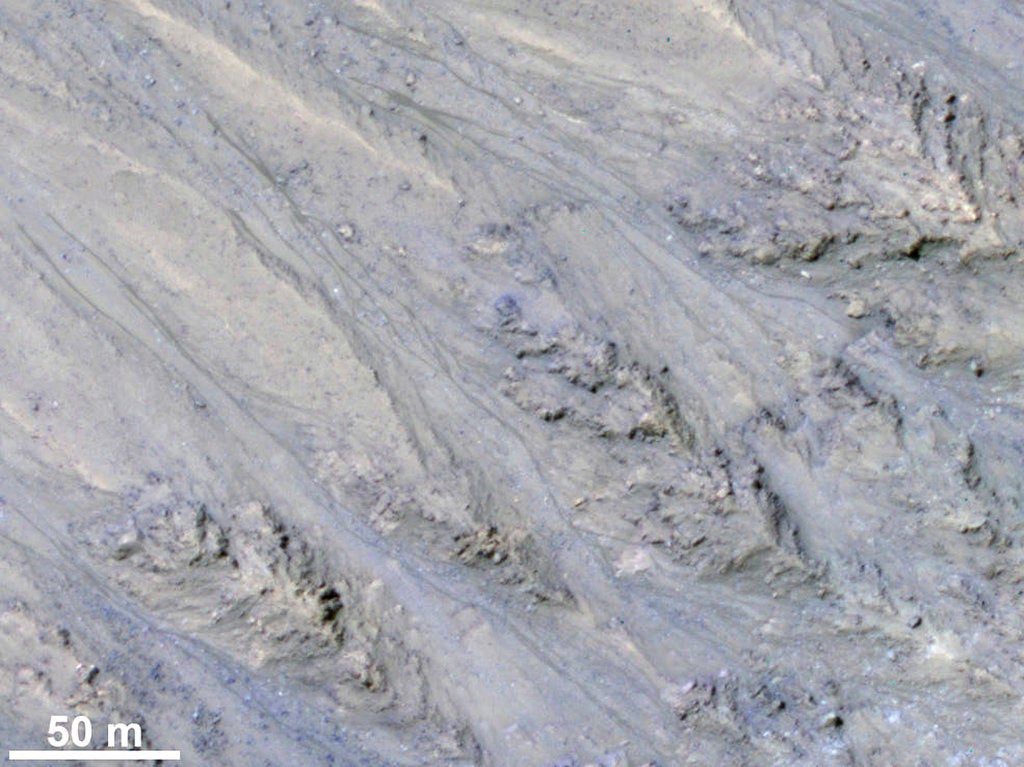 This image provided by NASA shows the inner slope of a Martian crater which has several of the seasonal dark streaks called “recurrent slope lineae,” or RSL, that a November 2017 report interprets as granular flows, rather than darkening due to flowing water. (NASA via AP FILE PHOTO)

The world’s space agencies are sending robotic vehicles to Mars in a bid to uncover signs of life but any attempt to return samples to Earth will be costly and complicated.

Schulze-Makuch said the research may help scientists home in on ways to study Martian microbes, which might have evolved to the planet’s colder, drier climate over time, much like the Atacama microbes.

“We know there is water frozen in the Martian soil and recent research strongly suggests nightly snowfalls and other increased moisture events near the surface,” he said.

“If life ever evolved on Mars, our research suggests it could have found a subsurface niche beneath today’s severely hyper-arid surface,” he also said.                    /kga