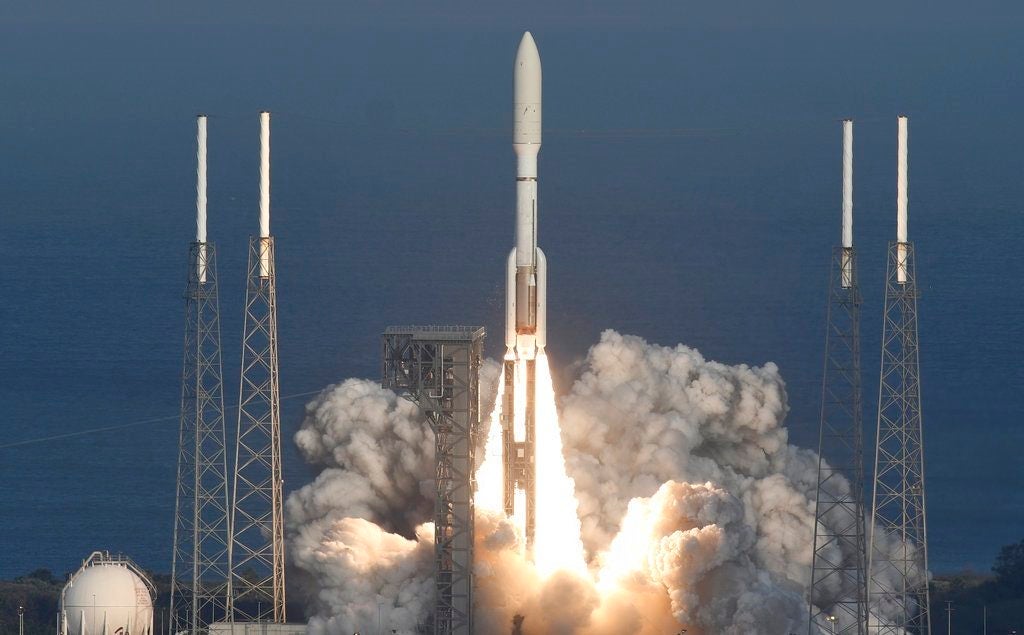 CAPE CANAVERAL, Fla. — NASA launched another of the world’s most advanced weather satellites on Thursday, this time to safeguard the western United States.

The GOES-S satellite thundered toward orbit aboard an Atlas V rocket, slicing through a hazy late afternoon sky. Dozens of meteorologists gathered for the launch, including TV crews from the Weather Channel and WeatherNation.

GOES-S is the second satellite in an approximately $11 billion effort that is already revolutionizing forecasting with astonishingly fast, crisp images of hurricanes, wildfires, floods, mudslides, and other natural calamities.

The first spacecraft in the series, GOES-16, has been monitoring the Atlantic and East Coast for the past year for the National Oceanic and Atmospheric Administration (NOAA). The same first-class service is now coming to the Pacific region.

Besides the West Coast, Alaska and Hawaii, GOES-S also will keep watch over Mexico and Central America. It will become GOES-17 once it reaches its intended 22,000-mile-high orbit over the equator in a few weeks, and should be officially operational by year’s end.

The weather service’s Jim Yoe said on NASA TV that he was “really excited” to see his first launch in person.

“I’m even more excited about the work that’s coming up for me and my colleagues, putting these new data to work for better forecasts and warnings for the American public,” said Yoe, an official at the Joint Center for Satellite Data Assimilation.

With these two new satellites, NOAA’s high-definition coverage will stretch from the Atlantic near West Africa – a hotbed for hurricane formation – all the way across the US and the Pacific out to New Zealand.

It is the third weather tracker launched by NASA in just over a year. The two other weather trackers were GOES-16, which was launched in late 2016, and an environmental satellite rocketed into a polar orbit from California in November 2017.

These next-generation Geostationary Operational Environmental Satellites, or GOES, are “a quantum leap above” the federal agency’s previous weather sentinels, according to Volz.

This is the 18th launch of a GOES since 1975; one was lost in an explosion during liftoff and all but three of the satellites already up there are retired. Rockets by United Launch Alliance, a venture between Lockheed Martin and Boeing, carried all those GOES.

Even as it was still being checked in orbit, GOES-16 provided invaluable data to firefighters battling blazes in Texas, Oklahoma and elsewhere last March and to Houston-area rescue teams in the flooded aftermath of Hurricane Harvey last August, according to officials. GOES-16 also observed the uncertain path of Hurricanes Irma and the rapidly intensifying Hurricane Maria in September.

GOES-16 “turned out to be better than we expected it to be,” said National Weather Service director Louis Uccellini, on hand for Thursday’s launch. The satellite was not officially on duty yet, “and we were just standing there gawking at the imagery.”

As Hurricane Harvey approached the Texas coast, the satellite revealed the clouds sinking in the eye and the eye expanding as the storm morphed from a category 2 to 4, Uccellini said. Those images helped determine when it was safe for rescue teams to go out and save stranded residents, he added.

The satellite also alerted authorities in Texas and Oklahoma to the eruption of new blazes even before the 911 calls came in, Uccellini said. He said the satellite also tracked the direction of the fires like never before, prompting first responders to later tell NOAA: “You saved lives.”