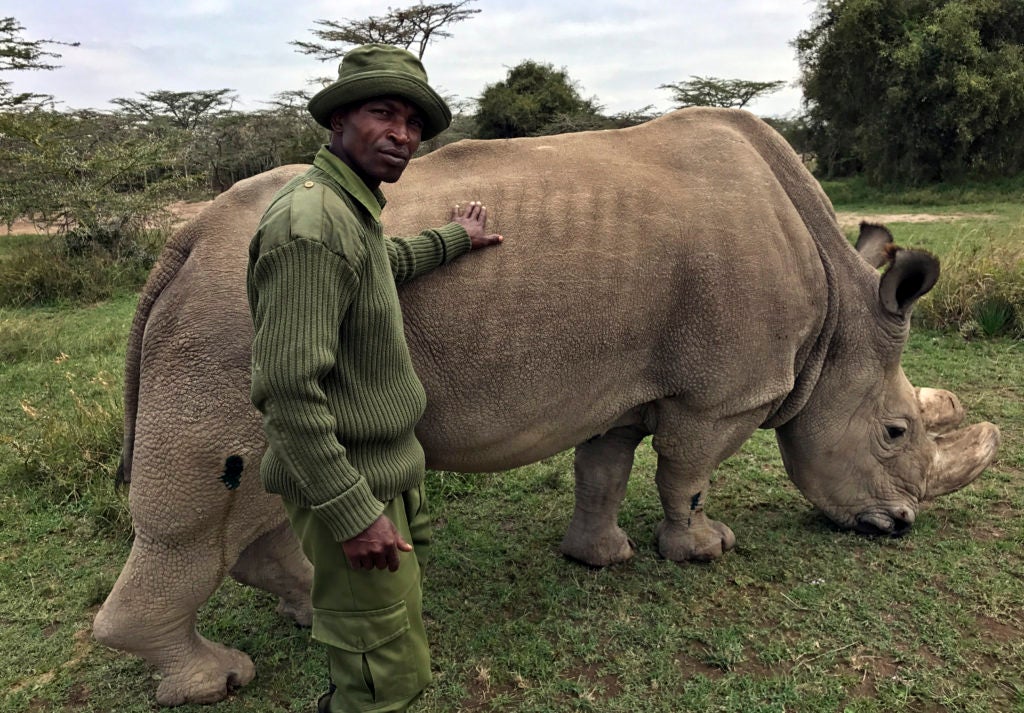 In this Friday, July 28, 2017 file photo, wildlife ranger Zachariah Mutai takes care of Sudan, the world’s last male northern white rhino, at the Ol Pejeta Conservancy in Laikipia county in Kenya. The health of 45-year-old Sudan is deteriorating and his minders said Thursday, March 1, 2018 that his “future is not looking bright.” Image: AP/Joe Mwihia

JOHANNESBURG (AP) — The health of the world’s last male northern white rhino has deteriorated, bringing the rhino subspecies a step closer to extinction caused by poaching.

The 45-year-old rhino named Sudan, listed as “The Most Eligible Bachelor in the World” on the Tinder dating app last year as a fundraiser, lives with the last two female northern white rhinos. Kenya’s Ol Pejeta Conservancy said Thursday that Sudan was struggling despite 24-hour care by veterinarians.

Sudan appeared to recover well from an infection that developed on his back right leg at the end of 2017 but another, deeper infection was recently discovered in the same area, the conservancy said.

“We are very concerned about him — he’s extremely old for a rhino and we do not want him to suffer unnecessarily,” the conservancy said in a statement.

Sudan and the females Najin and Fatu, along with a second male from the same subspecies that since died, arrived at Ol Pejeta from a Czech zoo in 2009.

San Diego’s zoo had some northern white rhinos, but the last one died in 2015.

Northern white rhinos once roamed parts of Chad, Sudan, Uganda, Congo and Central African Republic, and there were more than 2,000 remaining as recently as 1960, according to Save the Rhino International, a London-based group.

The last northern white rhinos in the wild were observed more than a decade ago in Congo’s Garamba National Park, whose animals have often been targeted by armed groups amid conflict in the region. Efforts to safeguard the subspecies by moving a small number to Kenya collapsed.

There are roughly 20,000 southern white rhinos in Africa after efforts to save them from extinction began in the 1950s. Their numbers had dwindled to fewer than 100 in the late 19th century because of uncontrolled hunting.

African rhinos remain under intense pressure from poachers who kill them to meet demand for their horns in illegal markets, primarily in Vietnam and China. There are about 5,000 critically endangered black rhinos.

In Asia, the greater one-horned rhino species has been recovering and has a population of several thousand. The Sumatran and Javan rhinos are in extreme peril, with fewer than 100 of each species remaining. CC

Poachers trespass on Paris zoo, kill rhino for its horn