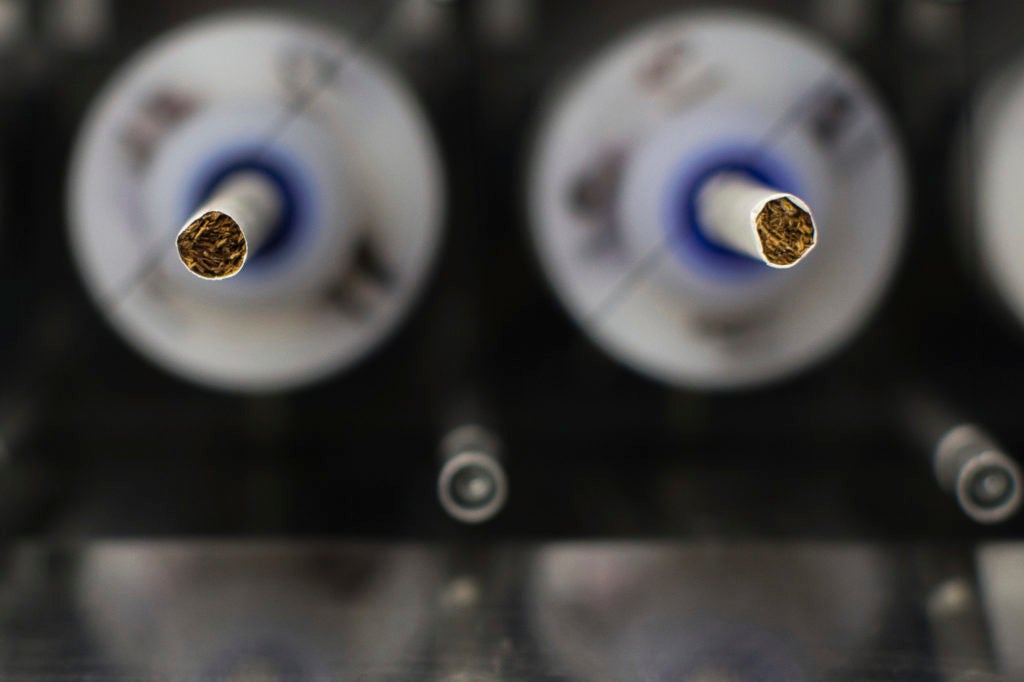 In this Thursday, Nov. 10, 2016 file photo, test cigarettes sit in a smoking machine in a lab at the Centers for Disease Control and Prevention in Atlanta. On Wednesday, March 14, 2018, the U.S. Food and Drug Administration announced a sweeping anti-smoking plan to drastically cut nicotine levels in cigarettes. Image: AP/Branden Camp

The Food and Drug Administration floated the proposal last summer, but provided new details in a government filing on the potential impact of drastically cutting nicotine from cigarettes, by as much as 80 percent.

Currently, there are no limits on nicotine, which occurs naturally in tobacco plants. Under law, the FDA can regulate nicotine although it cannot remove it completely.

The FDA’s powers to police the tobacco industry are unique worldwide and the attempt to restrict nicotine would represent a first in global efforts to reduce smoking-related deaths.

Under one scenario, the FDA estimates the U.S. smoking rate could fall as low as 1.4 percent by 2060, down from the 15 percent of adults who smoke now. The agency also calculates that about 5 million more people would quit cigarettes within one year of implementing limits.

The greatest impact, though, would come from preventing young people from ever becoming addicted, they said.

Limiting nicotine “could help keep future generations of kids who experiment with cigarettes from making the deadly progression from experimentation to addiction,” said Mitch Zeller, the head of the FDA’s tobacco center.

Key to FDA’s proposal: Nicotine is highly addictive, but not deadly. Instead, it’s the burning tobacco and other substances inhaled through smoking that cause cancer, heart disease and bronchitis. Smoking causes more than 480,000 deaths each year, despite decades of anti-smoking measures that have pushed the smoking rate to new lows.

The agency is first seeking comment on a number of issues, including potential unintended consequences, such as the creation of a black market for higher nicotine products.

The FDA gained authority to regulate ingredients in cigarettes and other tobacco products in 2009. But FDA’s regulatory efforts have been hampered for years by legal challenges by Big Tobacco companies.

“Altria has already been preparing for any reasonable potential standard, and we plan to participate in every step of this process,” said Altria, parent company of Marlboro-maker Philip Morris USA, in a statement.

Tobacco industry analyst Bonnie Herzog estimates it will be 4 to 5 years before the FDA puts in place any changes, due to “the sheer complexities and risks involved.”

“Today’s action is a first step, but it will only have an impact if the FDA quickly develops and implements a final regulation,” said Matthew Myers, of the Campaign for Tobacco-Free Kids.

Low-nicotine cigarettes are not a new idea and several companies, including Philip Morris, experimented with selling the products in the U.S. during the 1980s and 1990s, without much success. There are several techniques for removing nicotine, including chemical extraction and cross-breeding plants.

The FDA has sponsored several recent studies showing that when smokers switch to very low nicotine cigarettes they smoke less and are more likely to try quitting. The research is considered pivotal to establishing that smokers won’t compensate by smoking more cigarettes or inhaling more deeply if nicotine levels are low enough. That was sometimes the case with “light” and “low tar” cigarettes marketed in decades past. Those products were banned as misleading.

The plan to restrict nicotine in cigarettes is part of a broader anti-smoking push outlined by FDA Commissioner Scott Gottlieb. For smokers who can’t or won’t quit, he envisions a new class of FDA-reviewed products that deliver nicotine without the toxic byproducts of burning tobacco.

While some of those products might bear similarities to electronic cigarettes, the FDA has not granted any company permission to market its product as a “reduced-risk” alternative to cigarettes.

The FDA gained authority over e-cigarettes in 2016, but Gottlieb delayed a deadline for manufacturers to submit their products for review until 2022. He said the decision — heavily criticized by anti-smoking groups — was necessary to give both the FDA and manufacturers more time to prepare.

It remains unclear whether e-cigarettes — which heat liquid nicotine into a vapor — help smokers quit.

“The jury is still out on the value of those products as alternatives,” Gottlieb said, but he added there are opportunities for other potentially lower-risk products. CC

A neighbor’s smoke is toxic — especially to children