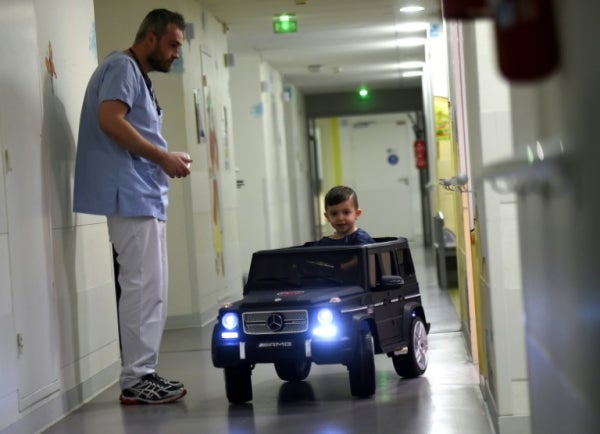 Wearing a big grin, Marame clambers into the small electric sports car and drives off — to the operating theatre.

The five-year-old girl is a patient at the public hospital in the northern French city of Valenciennes, which has begun using toys rather than drugs to alleviate children’s fears of surgery.

The new scheme for youngsters aged 18 months to eight years is based on similar programmes in the United States and Australia.

The playful approach, implemented in December, has wiped out the need for anti-anxiety medication often administered before an operation, according to the hospital.

“It allows (children) to arrive in the operating theatre in a fun manner and avoids the stress associated with the context,” anesthetist Fanny Defrancq told AFP.

Sat on a hospital bed, Marame looks worried ahead of her surgery to remove a metal pin inserted into her arm after she broke her elbow.

But then a nurse comes in and leads her to three small vehicles parked in the corridor.

“Which one do you prefer?” the nurse asks Marame, dressed in a blue hospital gown and with a white cap covering her hair.

After carefully inspecting the models and testing out their horns, the little girl gets behind the wheel of a black racing car and cruises off under the envious glances of other young patients.

A remote control in hand, a medical staff member steers Marame down hallways and around corners all the way to the operating theatre.

“She doesn’t even take any notice of me,” says her bemused mother, Hassiba Mazouzi, after giving her a last hug.

“Last time (she went into surgery) I cried,” Mazouzi says. “But now… she went without crying, without any problem. So frankly, I’m happy too.”

Doctor Nabil El Beki, who heads the emergency unit in Valenciennes, insists the programme is not a “game”.

A study is underway to “scientifically assess” the benefits of the project, he told AFP.

“We know that anxiolytic drugs reduce anxiety but they also intensify the anaesthetic and delay the waking-up process. Avoiding them is better for the recovery,” he said.

“He’s like at home, he’s playing and it’s nice to see him like that,” she told AFP.

“It’s reassuring for me too. I feel less stressed about his going into the surgery.”

Other clinics in France are also experimenting with ways of avoiding pre-surgery medication for children.

A hospital in the western city of Rennes has developed an app called “You’re the hero” for children aged three to 10.

The young patients search for hidden objects in a virtual room, while they are being brought to the operating theatre on a stretcher.

The distraction method has seen a major drop in children’s anxiety and led to an 80-percent decrease in the use of medication, the Rennes hospital said.