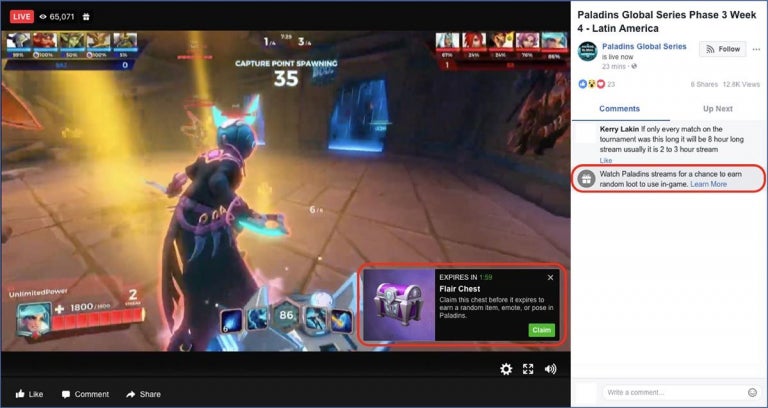 A new suite of software from Facebook allows game developers to attract viewers of livestreamed broadcasts with in-game rewards and integrate Facebook Analytics directly into their games.

The Software Development Kit is designed to increase engagement and embed app events and Facebook Analytics into PC and mobile games.

Massively multiplayer online game “Crowfall”, in paid beta since 2017, is one of the titles used to illustrate Facebook’s announcement, with multiplayer action game “Paladins” being another, while “Overwatch” and “World of Warcraft” developer Blizzard was also cited.

The livestreaming component of Facebook’s Games SDK will allow players to livestream directly from a game to Facebook “in a matter of seconds,” the company wrote in a March 19 update.

In the near future, video clips will be shareable to Facebook Pages, Groups and Profiles.

Players and developers are being incentivized to use the streaming feature via a reward system built into the SDK. Facebook invites game makers to “[curate and grant] free, in-game rewards for viewers that tune in during livestreams.”

The rewards system tacitly invites viewers to then play those games themselves, in order to redeem the virtual item at the very least. Facebook is also offering to provide developers with an enhancement to its Facebook Login and Facebook Friend Finder features.

The social media company wants players and game developers to focus attention on Facebook’s network via Key Player Stats, through which players can post their performance metrics to a Group and find others to play with.

Thirdly, App Events and Facebook Analytics provide the promise that developers will be able to better optimize the way their games work.

The Games SDK announcement came as Facebook was being accused of willfully ignoring the activity of Cambridge Analytica, a political consultancy firm that aggressively leveraged Facebook’s developer-side systems in order to influence millions upon millions of United States voters.

It did so through the covert harvesting and analysis of profile data in the lead-up to the 2016 U.S. Presidential Election, according to a whistleblower. JB