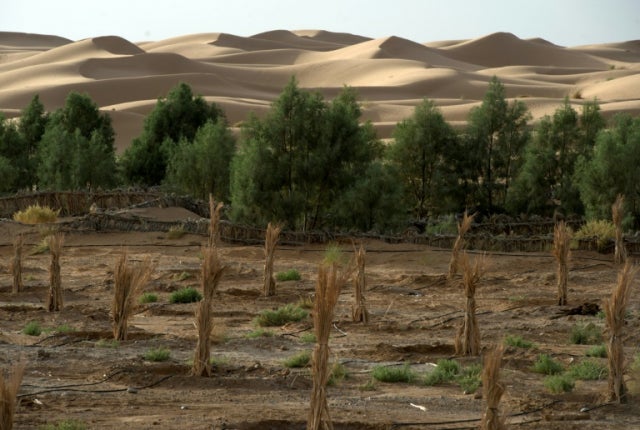 Scientists will publish the first-ever analysis Monday of the global state of land and its ability to sustain a fast-growing human population that relies on it for 95 percent of all food.

The diagnosis is likely to be dire, providing a comprehensive overview of what other reports have already warned: unsustainable farming, mining, factory production, and climate change is pushing Earth to breaking point, leading to human conflict and mass human migration.

“Land degradation… affects many parts of the world and it affects many people in the world today,” Robert Watson, chairman of the Intergovernmental Science-Policy Platform on Biodiversity and Ecosystem Services (IPBES), told AFP.

“It has adverse effects on things such as food production, such as quality of water, livelihoods are affected by land degradation, people often have to migrate as lands degrade,” he said ahead of the report’s release in Medellin, Colombia.

According to the UN’s Food and Agriculture Organization, 95 percent of human food comes directly or indirectly from Earth’s soil.

“With a global population that is projected to exceed nine billion by 2050, compounded by competition for land and water resources and the impact of climate change, our current and future food security hinges on our ability to increase yields and food quality using the soils that are already under production today,” it said in a 2015 report.

According to Watson, land degradation is commonly caused when humans convert natural land for extractive purposes.

In January, a study in Nature Climate Change warned that more than a quarter of Earth’s land surface will become “significantly” drier even if humanity manages to limit global warming to two degrees Celsius (3.6 degrees Fahrenheit) — the goal espoused in the Paris Agreement.

Aridification hastens land degradation and desertification, and the loss of plants and trees crucial for absorbing Earth-warming carbon dioxide.

The IPBES assessment took 100 volunteer scientists from around the globe three years to compile, analyzing all the available scientific data.

The end product covers the entirety of Earth’s land, as well as the lakes and rivers it supports.

IPBES executive secretary Anne Larigauderie told AFP the report was compiled at the request of the UN Convention to Combat Desertification.

“They needed rather urgently a report on land degradation because they have not had in the history of their convention… a scientific report as a basis for taking action and documenting the state of land degradation,” she said.

On Friday, the 129-member IPBES brought out four mammoth reports on the state of plant and animal species in all the world apart from Antarctica and the open oceans.

They concluded biodiversity was in decline in all regions, and warned human well-being was at risk as a result.

The land report, which cost about $1 million (810,000 euros) to prepare, was approved by government envoys at an IPBES meeting in Medellin this week.

Though not prescriptive, it contains recommendations for government policy-making.

“One of our goals will be to underline the fact that we can act, and that governments have a series of tools at their disposal to have an impact,” said Larigauderie. CC

Whose land? Whose development?