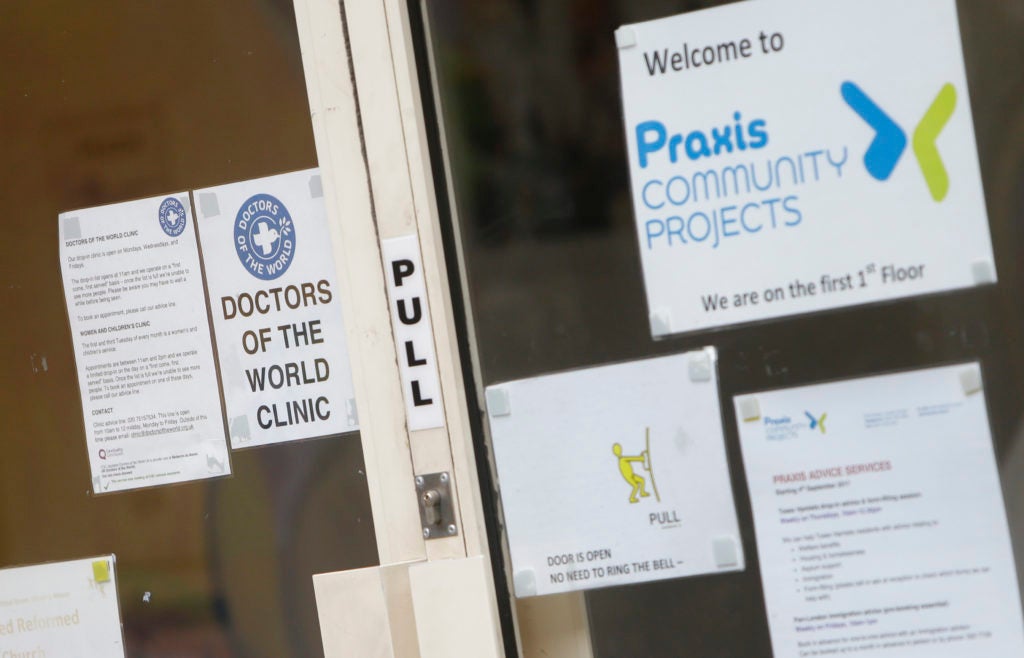 In this photo taken Friday, March 23, 2018 showing a general view of a surgery in east London. To track down refugees in Britain who may have broken immigration rules, the government is controversially turning to the doctors who treat them for information, although data sharing could make migrants nervous about getting medical attention. Image: AP/Alastair Grant

LONDON (AP) — To track down people in Britain who may have broken immigration rules, the government is turning to a new and controversial source of information: doctors.

Doctors who work with refugees and asylum-seekers have described the move as a major breach of medical ethics, saying it isn’t up to physicians to enforce immigration rules.

In letters recently made public, politicians sparred with immigration officials over a data-sharing agreement quietly signed in 2016 that gives the government access to personal information collected by the country’s family doctors. Medical details are excluded.

A parliamentary health committee condemned the situation as “unacceptable,” calling for the agreement to be suspended.

But Britain’s immigration department has dismissed those concerns, arguing that such data sharing allows the U.K. to remove people “who might pose a danger to the public.”

Several leading medical organizations, including the Royal College of General Practitioners, Public Health England and the General Medical Council, have all slammed the data-sharing deal, saying it could worsen the health of vulnerable people and drive disease outbreaks underground, hurting health care for all.

Dalia Omer, a refugee from Sudan who was granted asylum in the U.K. in February after nearly two years, sought medical help several times while awaiting the government’s decision. She said had she known about the data sharing arrangement, she would not have been as forthcoming.

“If I knew the doctors could share information with the Home Office, I would not tell them everything,” she said, referring to the British department that oversees immigration and security. She said she might even lie about certain details to protect herself.

Dr. Kitty Worthing, a London-based doctor with the group Docs Not Cops, said “the cornerstone of the doctor-patient relationship is confidentiality and this data-sharing is a direct breach of that.” She said when she’s advised people that their personal information could be shared with immigration officials “their reaction is always fear.”

Elsewhere in Europe, many countries have a strict firewall that stops information gathered by health services from being disclosed to other government agencies. Germany’s data protection office said regulations prohibit any blanket sharing of such information. In France, no data obtained by doctors is shared with the Interior Ministry.

Some health experts said it was critical that some types of health care are available to everyone in the U.K., regardless of their immigration status.

“With HIV treatment, it makes much more sense to treat everybody with HIV, because treatment lowers the level of virus in your blood so you can’t pass it on,” said Kat Smithson of the National AIDS Trust. “If people are not diagnosed because they’re not accessing health care, they’re not aware they’re living with HIV, which means they’re far more likely to pass it on to somebody else.”

The British government, however, says protecting its borders outweighs those concerns.

“We believe that the release of (patient) information is lawful and proportionate action in pursuit of the effective enforcement of the U.K.’s immigration policy,” wrote Caroline Noakes, the minister of state for immigration, and James O’Shaughnessy, parliamentary undersecretary of state for health, responding to lawmaker’s concerns.

They cited the case of a Pakistani citizen who overstayed a visitor’s visa. After the Pakistani was refused residency in 2013, contact with the Home Office was broken off. Immigration officials sent a request to health services, which revealed a new address.

“The Home Office visited the address and arrested the individual, a convicted sex offender, who is now complying with the Home Office and will leave the U.K.,” Noakes and O’Shaughnessy wrote, describing patients’ non-medical data as being “at the lower end of the privacy spectrum.”

From last November to January, health officials agreed to nearly 1,300 requests for information. Of those, health officials found 501 cases where patients had a different address from the one in Home Office records.

Some Londoners said it was OK for immigration officials to get data from doctors under certain conditions.

“If the Home Office needs the information for a good reason, I guess it’s OK, but they should ask the people for permission,” said Farooq, outside an east London clinic that provides health care largely for migrants. He declined to give his last name because he was worried about the immigration status of his father, originally from Afghanistan.

“It could put people in a risky situation if they’re worried about their visa and they need to see a doctor,” he said. CC

Ethics of healthcare in PH are quite good