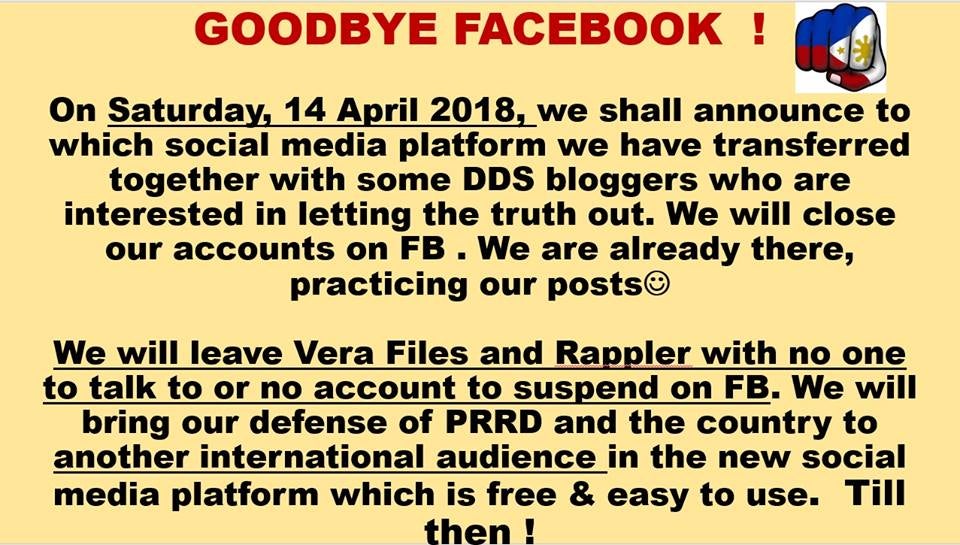 Prominent supporters of President Rodrigo Duterte have threatened to leave social networking site Facebook after discovering that it would be partnering with VERA Files, a non-stock nonprofit independent media organization, and Rappler, for its third-party fact-checking program in the Philippines.

Apart from having the ability to flag potential false news stories, VERA Files wrote that people will be informed if a story they shared on Facebook is rated as false through the third-party fact-checking program. This is in line with Facebook’s “three-part framework to improve the quality and authenticity of stories in the News Feed.”

It seems, however, that this latest partnership did not sit well with some leading Diehard Duterte Supporters, one of which is Filipino singer Jimmy Bondoc.

Bondoc took to his Facebook last week to his grievances over the social networking giant’s latest move, saying, “I guarantee you, if this happens, I will personally commence a nationwide petition to delete Facebook. I also assure you that I will be supported strongly. I also ask commenters to kindly suggest ASAP a new socmed platform that we can migrate to.” 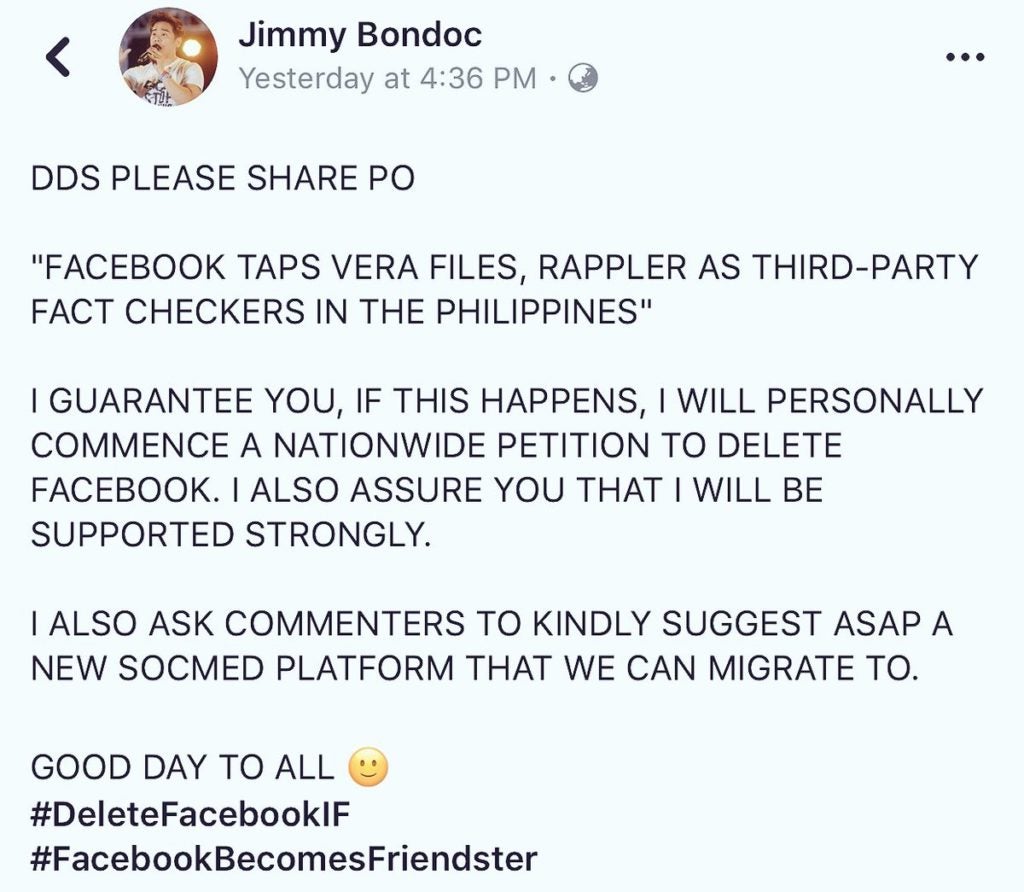 “I am closing my FB account. I am nothing to let Yellows fact check me or suspend my account. NO WAY ! My followers will follow me anyway,” wrote Atty. Knack. “Learning from me is FREE. We have talked to other DDS bloggers as well and they will also open new social media accounts there in the new platform.”

The new social media platform they will be transfering to turns out to be VKontakte or VK, a Russian-based online social media and social networking service which boasts around 460,000,000 users.

Atty. Knack, in another post, encouraged her followers to deactivate their accounts on Facebook and open an account in VK, Europe’s largest social media platform run by Russians.

“Look for your DDS group. The groups are ready. We are contacting all Moderators to return to their previous roles. We only opened it for your convenience,” wrote Atty. Knack. “When posting news links — there is a time lag (prevents spreading fake news fast). So post link, headline appears. If pic does not appear, post screenshot of headline.”

She added, “After 5 days, our groups will be deleted/deactivated. Do not let yellows censor or fact-check you. Let’s leave them to talk to themselves and get votes.”

“We will tell the world what is the truth in another platform — this time, in Europe! See you there!!!” 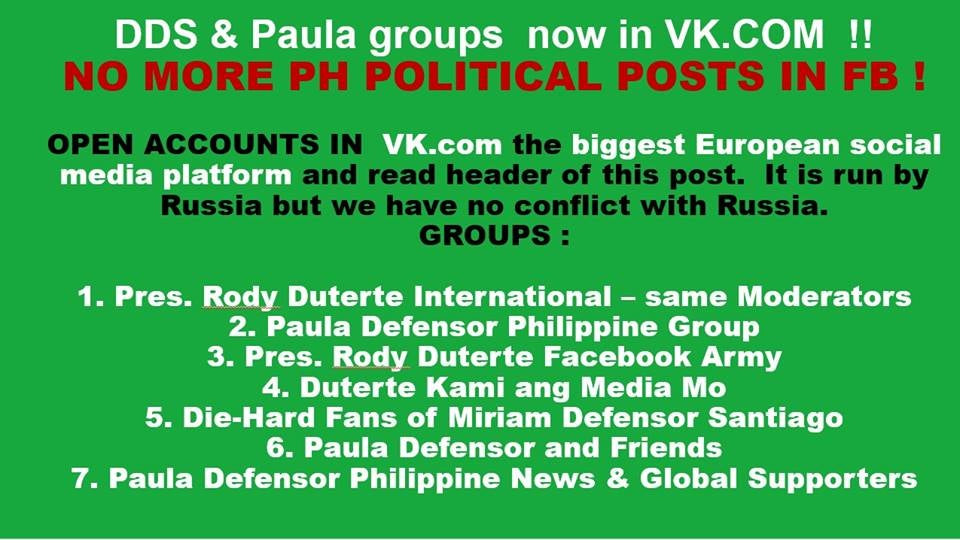 It appears, however, that the Duterte supporters’ mass deactivation and evacuation to VK is not unanimous among other prominent supporters of President Duterte, with some choosing to stay on Facebook. These include PCOO Assistant Secretary Mocha Uson, Sass Rogando Sasot and RJ Nieto of Thinking Pinoy, among others, who still remain active on Facebook.

Sasot herself told a follower last April 14 that deactivating their Facebook account would be akin to giving up: “No. Why would you deactivate? That’s surrendering without a fight.”

On the other hand, Lorraine Marie T. Badoy, Undersecretary of the Presidential Communications Operations Office (PCOO), took to her Facebook page in April 13, where she lauded Facebook’s third party fact-checking program. However, she also protested Facebook’s choice of fact-checkers, writing, “We would also like to register our protest at the choice of fact-checkers by Facebook and this will be on the agenda when we finally get to sit with them soon.”

“Efforts are underway for both the PCOO and Facebook to sit across the table and discuss and hopefully, reach agreements that will get us closer to our shared goal of responsible and intelligent use of social media,” wrote Badoy. JB

Women journalists standing up to bullies is a Filipino tradition