Technology seen as shifting power of traditional media to people 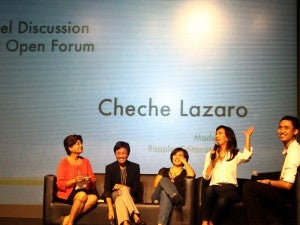 Seated from left to right are Cheche Lazaro, Maria Ressa, CEO and executive editor of Rappler, Veronica Pedrosa, presenter from Al-Jazeera English, Gina Lumawi, professor at the College of Communication in UP Diliman, and Joven Castro, Head of the Department of Communication in FEU, during the panel discussion and open forum at the recently held Rappler chat session in the FEU Auditorium.

Speakers from Rappler discussed the advantages, disadvantages, potentials, risks, and the future of online media.

Veronica Pedrosa, a presenter of the broadcast media Al-Jazeera English, gave the keynote speech about her views and thoughts on the changing media landscape.

She said that technology was shifting power away from the traditional media gatekeepers, editors, reporters, etc, and giving it to people.

Any person is capable of giving and sharing information with the help of social networking sites and Internet-capable devices, she said.

“People trust other people more because they believe leaders have their own agenda,” she said.

She highlighted the wave of protest movements throughout the Middle East and the North African countries that gathered momentum through the help of social media, eventually toppling governments.

Maria Ressa, chief executive officer and executive editor of Rappler, discussed how emotions could also spread through social media regardless of how far away people are from each other.

She encouraged people to speak up and join in the conversations in social networking site so that issues could be discussed and it would create a wave of positive actions and changes.

Online media is capable of spreading information quickly throughout the world, a feat that is almost impossible to do with traditional media, she said.

Chay Hofilena, said that the Philippines has 27 million registered users on the social networking site Facebook, and was ranked as the eighth in the world and second in Southeast Asia.

She said that there was great potential in the number of online users the Philippines has. Filipinos were quick to disseminate information during times of emergency like when Tropical storm “Ondoy” hit the country and caused massive flooding in Metro Manila. A large number of people posted online the locations of residents who were stranded on rooftops, which helped the authorities in their rescue operations.

However, there were also risks in the use of online media. She cited studies indicating that today’s generation would spend 10,000 hours online before becoming adults, that could lead to an imbalance between their virtual life and real life as well as anti-social tendencies.

Other risks are security and privacy issues and cyber-bullying, as in the case of Christopher Lao, where netizens quickly ridiculed him online after a video of him being interviewed on television went viral. His car had stalled after he drove it into a flooded street in Quezon city and was complaining that he was not informed about the depth of the water.

Ressa said that Rappler was possible through the unity of professional journalists, wisdom of crowds, and the rich media technology. Through Rappler, which is a combination of the words “rap” meaning to “speak” and “ripple” which is another term for “waves”, Ressa and her team in cooperation with the people, hope to create a wave of change in the media landscape using the power of words.