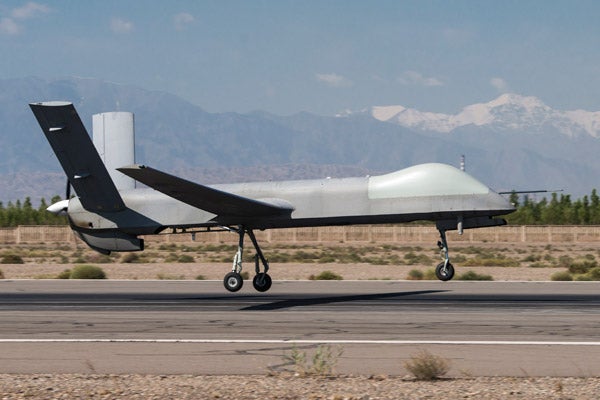 The maker of China’s best-selling unmanned combat aircraft is ready to market some of its killer drones for civilian commercial use.

Shi Wen, chief designer of the Caihong, or Rainbow, series at the China Academy of Aerospace Aerodynamics in Beijing, said it is widely believed among engineers at the academy that civilian users will buy more unmanned aircraft than will the military.

That’s why the academy decided to build some unarmed versions of the CH-4 and CH-5, which were developed as combat drones, and market them to private businesses. These civilian versions will be able to carry out a wide range of operations, such as engage in land surveys, environmental inspections and maritime surveillance, he told China Daily.

The use of unmanned aircraft will extensively improve the economy and efficiency in these fields, Shi said. “Compared with armed models, the civilian drones will have higher safety standards and lower production and operational costs,” Shi said.

“They also have many advantages compared with manned planes — they can be used day and night; they need less maintenance and fuel; and they can safely fly over hazardous or inaccessible areas without risks to humans. I can name more.”

The senior designer also said his academy plans to develop a variant of the CH-4 that will be suitable for deployment on plateaus to conduct both military and civilian tasks. He said this plateau model will have a new engine, modified wings and reinforced landing gear.

China has deployed several civilian CH-3s to prospect for mineral resources in the Xin­jiang Uygur autonomous region and northeastern provinces.

Those CH-3s, which originally were midrange reconnaissance/combat drones, are the world’s first deployable mine-survey drones, according to the academy. The unarmed CH-3s also have been used since July in the southern African country of Zambia to prospect for mineral resources.

The operation in the African nation is the first time large Chinese-made drones, unlike the small consumer models made by Chinese firms like DJI, performed a civilian mission in a foreign country and also the first time an African nation used an unmanned aircraft to explore for mines, the academy said.

China Academy of Aerospace Aerodynamics is the country’s largest military drone exporter by the number of products sold overseas. Aircraft from its CH series have been sold to militaries in more than 10 countries, making it the largest drone family the country has exported, according to the academy.

According to foreign media, CH-3s and CH-4s are among the most popular combat drones on the international market and have played a big role in the fight against terrorism.