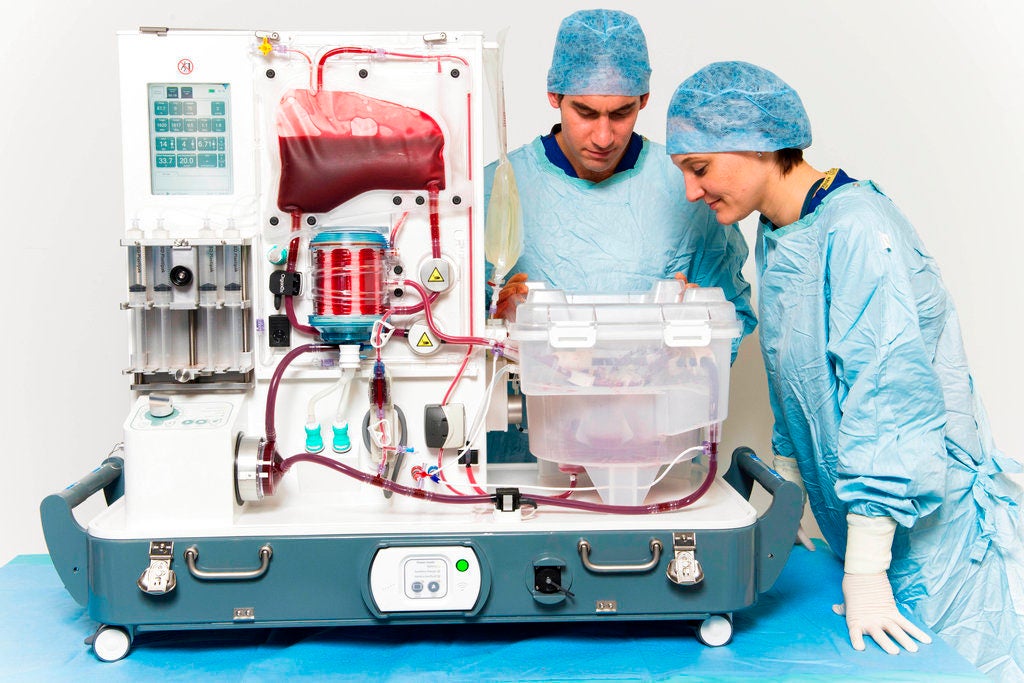 WASHINGTON (AP) — Surgeons pack donated organs on ice while racing them to transplant patients but it may be time for a warmer approach. British researchers said Wednesday that keeping at least some livers at body temperature instead may work better.

The livers keep functioning until they’re transplanted thanks to a machine that pumps them full of blood and nutrients. It’s a life-support system for the organs, and similar machines are being explored for lung and heart transplants, too.

The transplant community isn’t ditching affordable ice chests for the far pricier approach just yet. But proponents hope that storing organs in a way that mimics the body might eventually increase the number of transplants — by keeping precious donations usable for longer periods, and allowing use of some that today get thrown away.

“The biggest challenge in liver transplantation is the desperate shortage of organs,” said Dr. David Nasralla of the University of Oxford, who led the study in Britain and Europe. “We found that livers that went on the machine were more likely to be transplanted.”

Nearly 115,000 people are on the waiting list for an organ transplant in the United States alone, and last year there were just 34,770 transplants performed. Thousands die waiting. Partly, there are too few donations. Also, donated organs can’t be stored for long — about four to six hours for a heart or lung, and about 12 hours for a liver. And sometimes surgeons discard organs they fear won’t do well because of a donor’s age or other health characteristics.

Still, the vast majority of transplant recipients survive — showing the decidedly old-fashioned method of popping a donated organ into an ice chest with a cold preservation solution and rushing it to an operating room works pretty well. Organs essentially hibernate, not frozen but cold enough to slow cellular activity and thus their deterioration.

He isn’t involved with studies of so-called “normothermic” preservation but calls it “really exciting technology” that might turn out to be appropriate for select organ donations rather than all of them.

The new study involved 220 liver transplants performed in Britain, Belgium, Germany and Spain. Participating hospitals randomly assigned newly donated livers to be put into coolers as usual — or to be stored for up to 24 hours in a machine made by Britain’s OrganOx Ltd. that keeps the organs functioning with warm fluids.

The study wasn’t big enough to detect any potential differences in patient survival. But the warmed livers were healthier when transplanted, the researchers reported in the journal Nature. They had less cellular damage during storage, a risk for transplant failure, than the livers kept on ice.

More compelling, surgeons preserved the warmed livers several hours longer yet discarded fewer of them, ultimately transplanting 20 percent more of those organs than the cooled ones, the study found.

Why? Instead of having to guess how well a liver would work based on its donor’s characteristics, Nasralla said surgeons spent the extra time measuring how the organs functioned inside the warming machine. The study was funded by a European Commission grant.

The results are promising but surgeons are watching for more evidence that such a big, and expensive, change in organ storage is worthwhile — and if so, when best to use it, said Dr. Devin Eckhoff, transplant division director at the University of Alabama at Birmingham.

OrganOx’s liver machine is approved abroad but experimental in the U.S., where a similar study is underway at 14 transplant centers including Eckhoff’s. A competing company, Massachusetts-based TransMedics Inc., recently won U.S. Food and Drug Administration approval for warm preservation of donated lungs.

Friend couldn’t provide exact costs. He said more study is needed to tell whether spending thousands more up-front on high-tech organ preservation might prove cost-effective if it lets doctors save organs that otherwise would be wasted or postpone middle-of-the-night transplants until morning.

UNOS’ Klassen says the bigger question is if scientists might use such machines to “recondition” organs, by adding medications or other therapies to make them healthier before transplant. AB