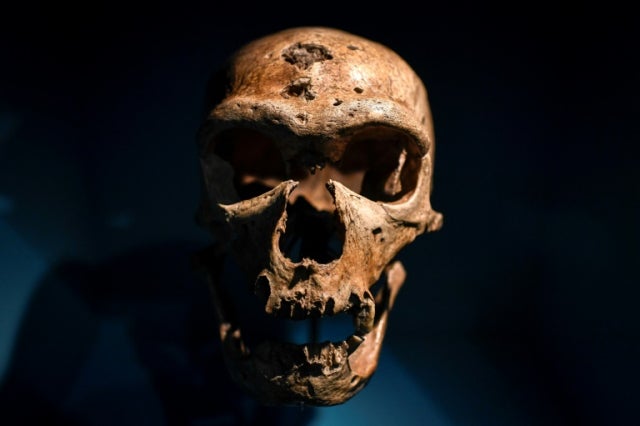 A skull is displayed as part of the Neanderthal exhibition at the Musee de l’Homme in Paris on March 26, 2018. Image: AFP/Stephane de Sakutin

Scientists have for the first time set eyes on a three-dimensional Neanderthal brain in the form of a virtual model made to fit the empty, fossilized skulls of long-dead individuals, a study said Thursday.

The reconstructed organ confirmed earlier observations, based more loosely on head size and shape, that Neanderthals had a larger brain than their early Homo sapiens cousins, but with a smaller cerebellum — the lower part near the spine that controls balance and movement.

It is also involved in speech and learning.

The distinction may have caused social and cognitive differences between the near relatives, and may explain why one went extinct while the other thrived, said Naomichi Ogihara of the Keio University in Japan, who co-authored a study in the journal Scientific Reports.

“Although the difference could be subtle, such a subtle difference may become significant in terms of natural selection,” he told AFP.

But nothing can be concluded yet about any relation between the Neanderthal’s brain organization and its eventual demise.

Ogihara and a team combined the disciplines of physical anthropology, mechanical engineering, and neuroscience for their reconstruction.

They used virtual casts to model the shape and size of four fossilized Neanderthal skull cavities, and four of ancient humans.

They then used MRI scans from nearly 1,200 modern-day people to model an “average” human brain, which they “deformed” to fit into the prehistoric skulls.

This allowed the team to estimate what the brains would have looked like, and how individual regions would have differed between the two species.

“We are so far from understanding the brain of prehistoric humans that any small advance is welcome,” French palaeoanthropologist Antoine Balzeau told AFP of the study.

He was not involved in the research.

Neanderthals emerged in Europe, Central Asia and the Middle East some 200,000 years ago. They vanished about 30,000 years ago — coinciding roughly with the arrival of modern humans out of Africa.

Long portrayed as knuckle-dragging brutes, recent studies have started to paint a picture of Neanderthals as sophisticated beings who made art, took care of the elderly, buried their dead, and may have been the first jewelers — though they were probably also cannibals. CC