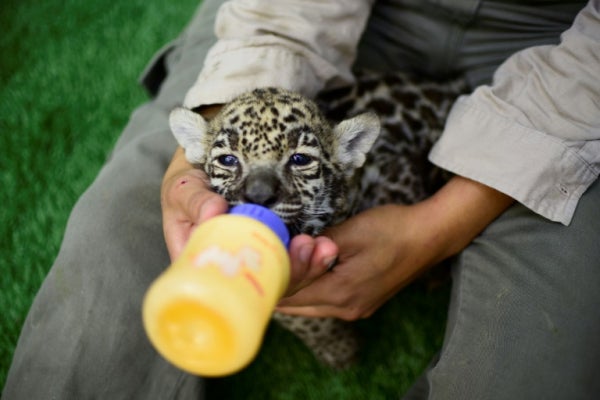 Two jaguar cubs born five weeks ago are the new stars at a wildlife park in Mexico, teaching a valuable lesson about conservation with their cuddly cuteness, according to park officials.

The female cubs, who have not yet been named, had to be separated from their parents at 18 days old when one of them developed a skin condition that worried caretakers at Animal Kingdom in San Juan Teotihuacan, outside Mexico City.

They cannot be returned to their mother, who could kill them if she smells the human scent on them.

Nursed back to health, the cubs now frolic and play with their caretakers — who feed them through baby bottles — and explore their enclosure with tentative steps and outsized paws.

It is hard to imagine that in three months’ time they will be too large and dangerous to approach. Female jaguars weigh about 50 kilos (110 pounds) as adults, and males about 80 kilos (175 pounds) — though some reach up to 150 kilos (330 pounds).

Jaguars are the largest cats in the Americas, and the third-largest in the world, after lions and tigers.

Being able to approach them this close is a powerful experience of raw nature, he said.

“Seeing them up close, hearing them, smelling them, touching them. You can never forget that, and it awakens you to something bigger,” he told AFP, holding the cubs in his arms.

Animal Kingdom is trying to capitalize on its young stars’ celebrity to teach visitors, especially children, about conservation.

“Children are the ones who will inherit these species and this planet,” said Gonzalez.

Jaguars are classified as a “near-threatened” species by the International Union for Conservation of Nature, which says their population has declined by about a quarter in the past two decades. MKH

Rumble in the jungle: mother bear fights off Indian tiger

Tiger reported running through streets of New York — or not