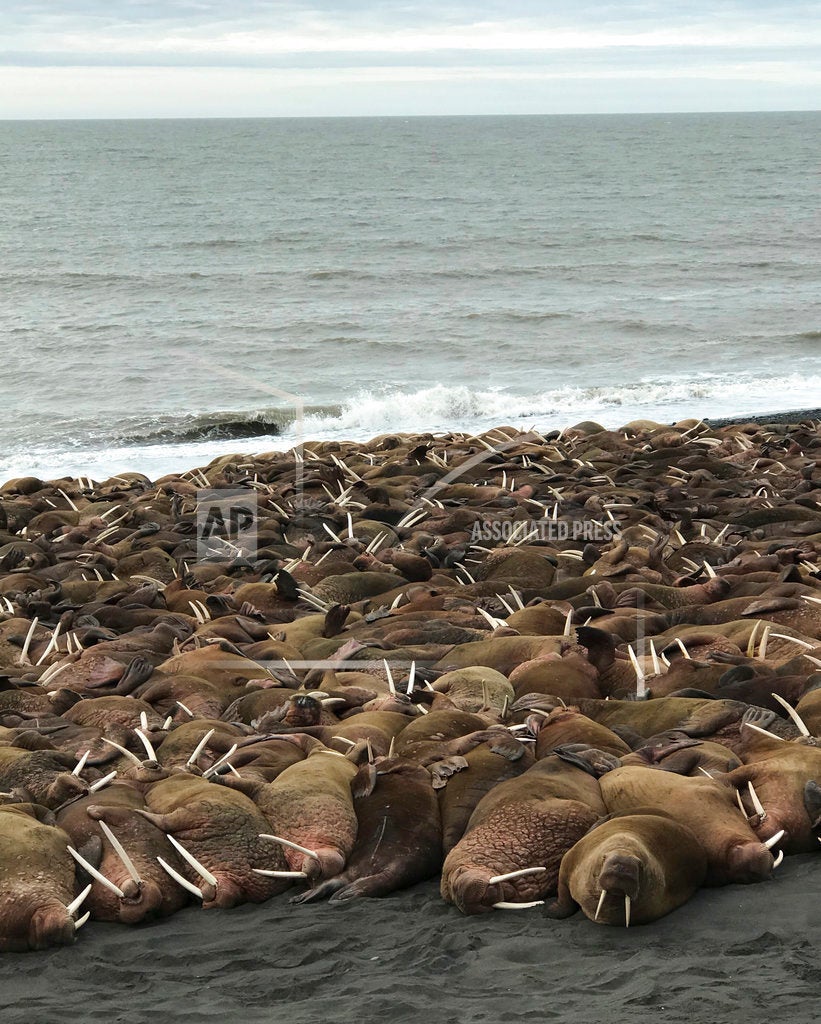 In this April 7, 2018 photo provided by John Christensen Jr., Pacific walruses rest on a beach a few miles outside Port Heiden, Alaska. Male walruses traditionally spend summers in the Bering Sea near Bristol Bay about 120 miles north of Port Heiden. The U.S. Fish and Wildlife Service says they may be seeking new foraging grounds. (John Christensen Jr. via AP)

ANCHORAGE, Alaska — Residents of a village of 110 on the Alaska Peninsula see the occasional walrus in Bering Sea waters, but when 200 packed a beach just outside the community, it took them by surprise.

Port Heiden’s Tribal Council President John Christensen, Jr. was on a beach ride with four-wheelers on April 7 and smelled something foul, he said on Wednesday.

“We thought something was dead, so we were looking for dead sea otters or seals on the beach so we could report them to the LEO (Local Environmental Observer) Network,” he said.

He followed his nose for a couple of miles and was startled to see a beach crowded with walruses.

Joel Garlich-Miller, a United States Fish and Wildlife Service biologist with a focus on walruses, is not sure why they are gathering on the Alaska Peninsula, the landmass that juts from mainland Alaska toward the Aleutian Islands but it may be related to food availability.

Male and female walruses spend winters in the Bering Sea but separate when the ice recedes with warmer temperatures.

Females and their calves ride the sea ice north all the way through the Bering Strait into the Chukchi Sea, using ice as a platform to dive for clams and other mollusks and rest.

That could be an effect of sea ice not forming as far south as in past years and male walruses spending more time in the northern Bering Sea, he added.

However, big bull walruses regularly go on foraging trips of five to seven days before “hauling out” to rest on land and may be spreading out to find better areas for diving, according to Garlich-Miller.

“They are trying to optimize their foraging,” he said. “One can imagine these many thousands of animals can probably put a hurt on some of the benthic resources they’re targeting.”

A chief concern for the agency is keeping walruses safe in the resting areas.