Tesla with Autopilot slams into truck stopped at red light 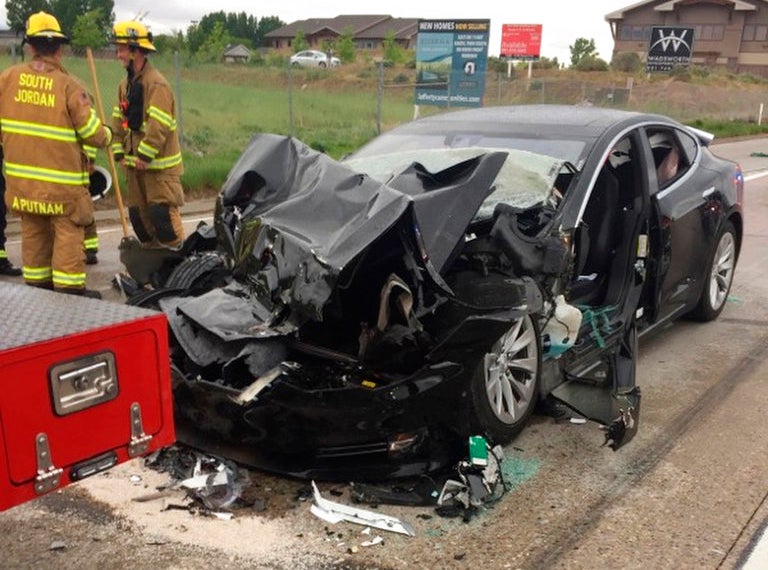 In this Friday, May 11, 2018, photo released by the South Jordan Police Department shows a traffic collision involving a Tesla Model S sedan with a Fire Department mechanic truck stopped at a red light in South Jordan, Utah. Witnesses indicated the Tesla Model S did not brake prior to impact. AP

SOUTH JORDAN, Utah, United States — A Tesla sedan with a semi-autonomous Autopilot feature has rear-ended a fire department truck at 60 mph (97 kph) apparently without braking before impact, but police say it’s unknown if the Autopilot feature was engaged.

The cause of the Friday evening crash, involving a Tesla Model S and a fire department mechanic truck stopped at a red light, was under investigation, said police in South Jordan, a suburb of Salt Lake City.

The crash, in which the Tesla driver was injured, comes as federal safety agencies investigate the performance of Tesla’s semi-autonomous driving system.

There was no indication the Tesla’s driver was under the influence of any substance, and information on what the driver may have told investigators about the circumstances of the crash likely wouldn’t be available before Monday, Winkler said by telephone.

There was light rain falling and roads were wet when the crash occurred, police said in a statement.

“Witnesses indicated the Tesla Model S did not brake prior to impact,” the statement said.

Tesla’s Autopilot system uses cameras, radar and computers to keep speed, change lanes and automatically stop vehicles. The company, which is based in Palo Alto, California, and has a huge battery factory in the Reno, Nevada, area, tells drivers the system requires them to keep their eyes on the road and their hands on the wheel so they can take control to avoid accidents.

Police said they had been in contact with the National Transportation Safety Board about the crash. NTSB spokesman Keith Holloway said he didn’t know whether the agency would get involved with the crash.

Tesla did not immediately respond to inquiries from The Associated Press.

The NTSB and the National Highway Traffic Safety Administration are investigating at least two other crashes involving Tesla vehicles. In March, a Tesla Model X SUV crashed on a California highway, killing the driver, and investigators are looking into the performance of the semi-autonomous driving system in that crash. /cbb