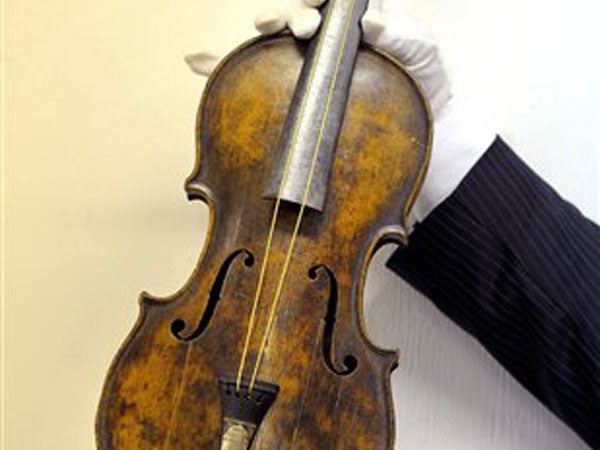 A violin, believed to be the one played by Titanic bandmaster Wallace Hartley, was displayed at auction house Henry Aldridge and Son in Devizes, England last October 18, 2013.  (AP FILE PHOTO)

Music historians have long suspected that the inventors of the violin wanted to imitate the human voice, and a study released on Monday showed how 16th- to 18th-century luthiers in Italy did it.

Researchers at National Taiwan University asked a professional violinist to play 15 antique instruments, including one from 1570 by Andrea Amati, the early 16th-century luthier from Cremony, Italy who is considered to be the father of the modern four-string violin.

Others played in the study were from the Stradivarius family, conceived by Antonio Stradivari, who improved upon Amati’s design.

First, researchers recorded scales played on the 15 antique instruments played by a professional violinist and recorded at Taiwan’s Chimei Museum.

Then, they recorded the voices of eight men and eight women, ranging in age from 16 to 30 years, who sang common English vowels.

Performing a thorough acoustic analysis, they found that an Amati violin dating to 1570 and a Gasparo da Salo violin dating to 1560 mimicked the basses and baritones of male singers, “raising the possibility that master violinmakers from this period may have designed violins to emulate male voices,” said the report.

“In contrast, Stradivari violins were marked by elevated formants, making them relatively more similar to female voices,” such as tenors and altos, the researchers added.

“These properties may explain the characteristic brilliance of Stradivari violins,” they noted.      /kga