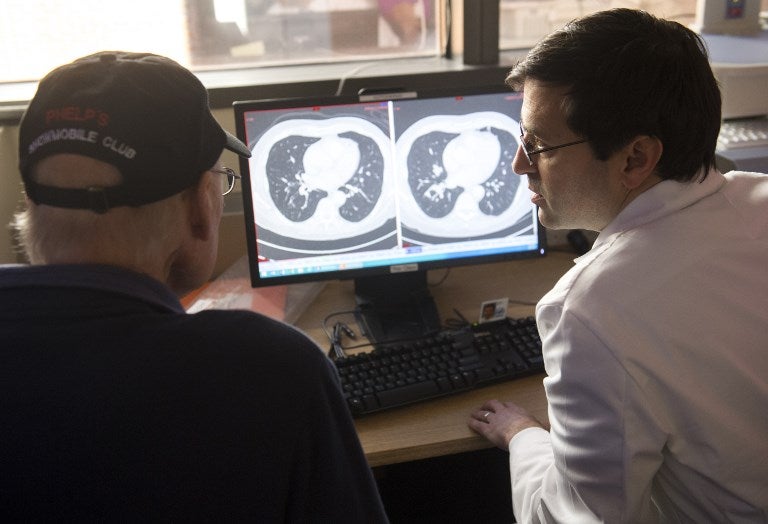 Dr. Christian Hinrichs (right), an investigator at the National Cancer Institute in immunotherapy for HPV+ cancers, shows patient Fred Janick, a survivor of metastatic cancer, the difference between his CT scan showing cancerous tumors (right) and a clean scan after treatment (left), after a day of medical exams showing no recurrence of cancer, at the National Institutes of Health (NIH) in Bethesda, Maryland, February 8, 2018. AFP

PARIS, France — A woman with an aggressive form of breast cancer which defied chemotherapy and spread to other organs, was cured with an experimental treatment that triggered her immune system, researchers said Monday.

The woman has been cancer-free for two years, reported the US-based team, presenting their results as “a new immunotherapy approach” for the treatment of patients with a late-stage form of the disease.

Other experts not involved in the work hailed it as “exciting”.

So-called “immunotherapy” has already been shown to work in some people with cancer of the lung, cervix, blood cells (leukemia), skin (melanoma) and bladder.

But an immune breakthrough for bowel, breast and ovary cancer has remained elusive.

In the latest study, a team extracted immune cells called lymphocytes from the patient, tweaked them in the lab, then reinjected them.

The woman was 49 when she signed up for the clinical trial after several attempts at a cure through conventional treatments had failed, said the study published in the scientific journal Nature Medicine.

The cancer had spread to various parts of her body, including the liver.

A person’s immune system is designed to kill invaders, including rogue, cancerous cells. But it can fail, often because it cannot recognize cancer cells containing the patient’s own DNA.

Immunotherapy trains a patient’s own immune cells to recognize and fight cancer.

For the new study, researchers took lymphocytes from a tumor in the woman’s body and scanned them for specific types which reacted to mutant, cancerous cells.

These were reactivated or “switched on” in the lab and injected back, along with a so-called “immune checkpoint inhibitor” — another type of immunotherapy that has shown success in other types of cancer.

This resulted in a “highly personalized” anti-cancer therapy that yielded “complete tumor regression,” the researchers wrote.

In a comment also published by Nature Medicine, expert Laszlo Radvanyi from Canada’s Ontario Institute for Cancer Research said the woman’s response to the treatment was “unprecedented” for such advanced breast cancer.

This work showed “we are now at the cusp of a major revolution in finally realizing the elusive goal of being able to target the plethora of mutations in cancer through immunotherapy,” he wrote.

In a reaction via the Science Media Centre in London, immunotherapy professor Alan Melcher of The Institute of Cancer Research said the trial was “fascinating and exciting”.

The work “provides a major ‘proof-of-principle step forward, in showing how the power of the immune system can be harnessed to attack even the most difficult-to-treat cancers,” he said.

Peter Johnson, an oncology professor at the Cancer Research UK Centre, said the study confirmed the immune system can recognize some cancers, and “if this can be stimulated in the right way, even cancers that have spread to different parts of the body may be treatable.”

The technique is “highly specialized and complex”, he cautioned, and may not be suitable for many patients. /cbb