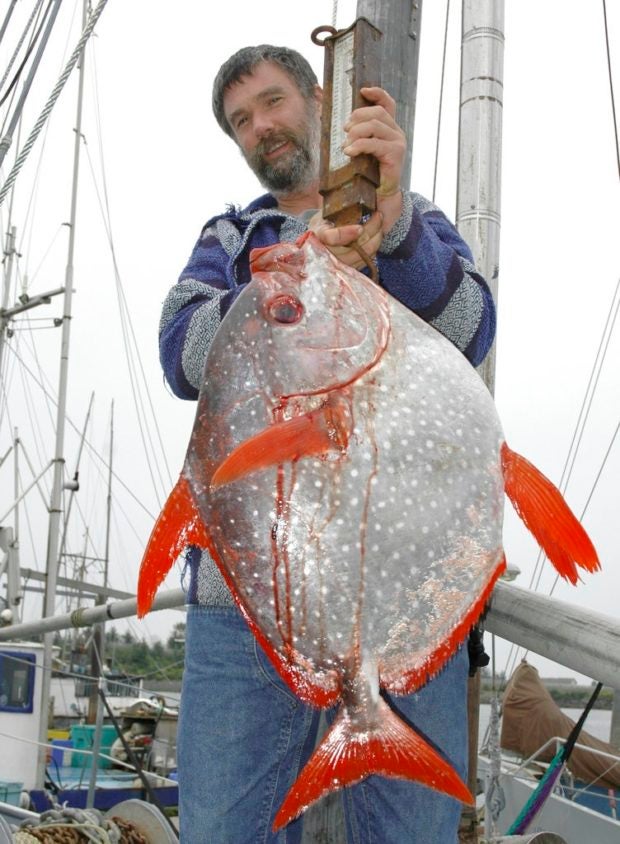 In this Sept. 12, 2005 file photo, John Petraborg holds up a 35-pound moonfish, also known as opah and normally found in the deep waters near Hawaii, on board his troller Roulette at ANB Harbor in Sitka, Alaska. Scientists have identified three new species of opah, a colorful peculiar deep-diving fish that is increasingly caught and served in United States restaurants. A team of researchers with NOAA Fisheries has identified five distinct species of opah, rather than just one. (James Poulson/The Daily Sitka Sentinel via AP)

SEATTLE — The fish buyer noticed something different about the large, colorful disc-shaped opah or moonfish waiting to be sold at the auction house in Honolulu. Among the differences: one fish had a bigger eye than the other.

His curiosity set in motion DNA testing and more sleuthing that led to the identification of three new species of opah — a peculiar deep-diving fish recently found to be the first fully warm-blooded fish.

“The more we looked, the more differences we could pull out,” said Karen Underkoffler, lead author of a recently published paper in the peer-reviewed journal Zootaxa that describes the anatomical characteristics of the different species of opah, including one marked by its big eyes and a purple tongue.

In all, the team of scientists with NOAA Fisheries identified five distinct species of opah, revealing that there is not a single global species. Three are newly identified, one was already named, and researchers better identified another that had been previously described.

“We have known for quite some time that opahs in different parts of the world look different,” Misty Paig-Tran, assistant professor of marine biology and biomechanics at Cal State Fullerton who was not involved in the paper, said in an email.

People were calling them all the same thing, and the paper clearly showed their differences, she wrote, adding that it was great to finally have anatomical descriptions and DNA to back those descriptions.

The researchers said knowing the population of opah — which has a silvery gray body, red fins and mouths, and white spots — is important to make sure they do not get overfished.

While opah is not harvested by commercial fisheries, the fish is often caught incidentally in commercial fishing for high-value tuna or swordfish off the coasts of Hawaii and California.

Sport anglers also frequently catch the colorful fish, which on average weighs about 100 pounds and can be bigger than an automobile tire.

Opah is becoming popular at restaurants in Hawaii and elsewhere. The value of United States commercial landings of opah has increased from just a few thousand dollars before 2000 to nearly $3.2 million in 2016. The Hawaii-based longline fishing industry reported the catching of nearly 30,000 opahs by vessels targeting tuna and swordfish in 2015.

Most opah landed by those vessels arrive at the United Fishing Agency auction in Honolulu, where Underkoffler was working several years ago, when Garrett Kitazaki flagged the big-eyed opah for her and her colleague Meagan Luers, another study co-author.

They took measurements, clipped fins, and sent tissue samples to the Southwest Fisheries Science Center in San Diego. From the samples collected at the auction, the team quickly determined the fish were distinct from each other.

“In that effort to find more, we stumbled across more very distinct opah species,” said John Hyde, program leader of genetics fisheries at the Southwest Fisheries Science Center who did the DNA tests.

They put out a call to museums, ports, and commercial fisheries to get samples of opah. They thumbed through literature dating back to the 1700s to find references and descriptions of the fish. Underkoffler even traveled to Monaco to check out a specimen.

Hyde said that “when you realize there are five species instead of one, it tells us there’s a lot to still discover out there.”  /kga