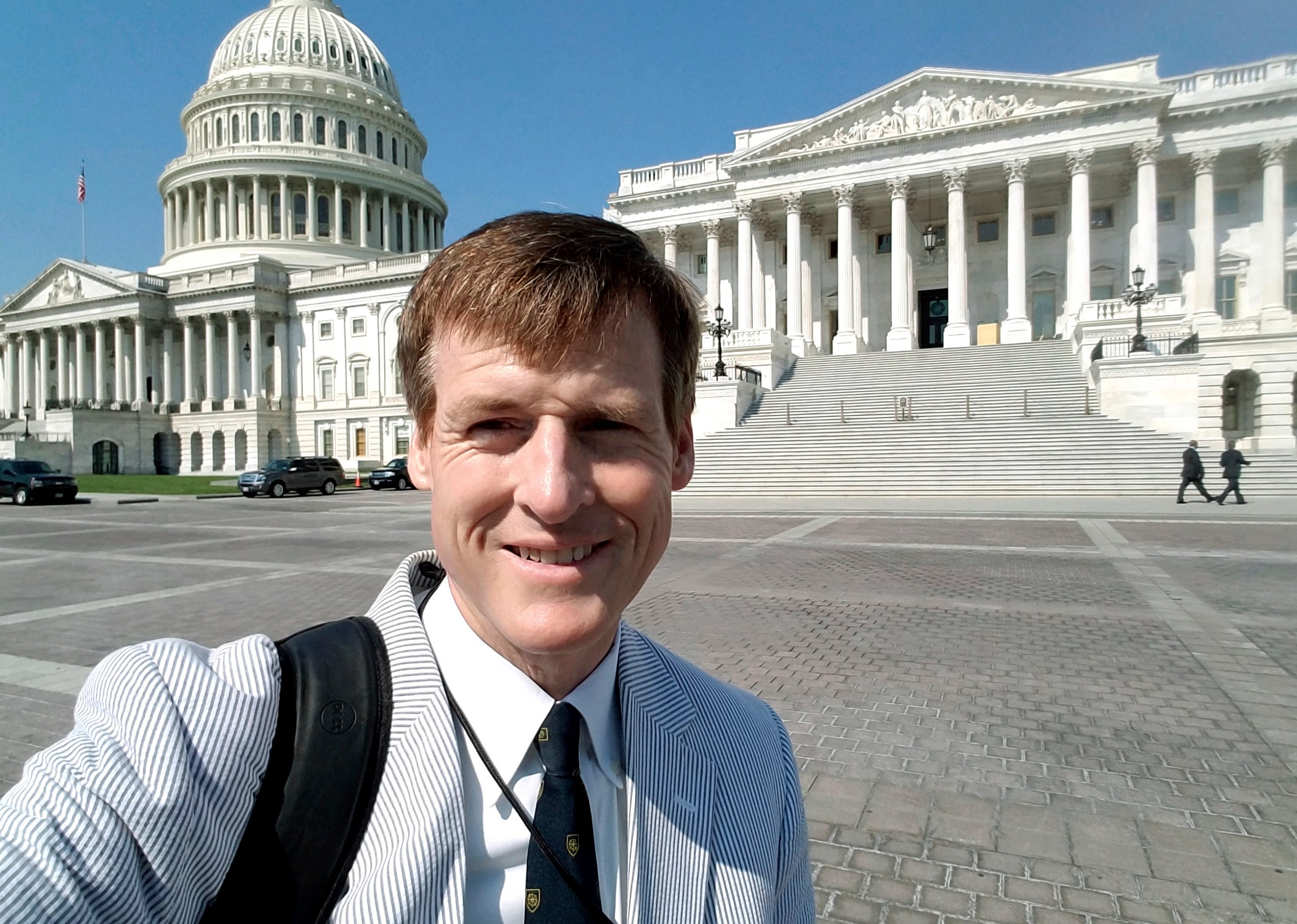 In this Aug. 2, 2017 photo released by Jamie Dupree, Dupree, a Cox Media Group radio reporter, poses in front of the U.S. Capitol in Washington. Two years ago, Dupree encountered what others in his profession might see as an unsurmountable challenge: He lost his voice. Now he may have found a solution. A Scottish company that creates text-to-speech technology has crafted a new “voice” for Dupree: software turns his typed sentences into spoken words. (Jamie Dupree via AP)

ATLANTA — Two years ago, longtime radio reporter Jamie Dupree encountered what others in his profession might see as an insurmountable challenge: He lost his voice.

The 54-year-old veteran political newsman for Cox media found a workaround: He focused on text-based reporting and communicated with interview subjects through notecards.

But being unable to speak was not just a problem in his profession; it affected every area of his life.
Now, with the help of technology, he can “speak” again. CereProc, a Scottish company that creates text-to-speech technology, has crafted a new voice for
Dupree: software that turns his typed sentences into spoken words.

Thanks to the tool, Dupree’s voice will be back on the air next week on radio stations in Atlanta; Orlando and Jacksonville, Florida; Dayton, Ohio; and Tulsa, Oklahoma.

The journalist’s ordeal began in April 2016, while on a family trip to England, he told The Associated Press in an email interview.

“When I came home, it took a few weeks to get better, and during that time, my voice just went downhill,” he wrote.

His voice eventually diminished to a squeak before disappearing entirely, he said.

Based in Washington, Dupree had been reporting since the Reagan era and covered every presidential campaign since 1992.

But as the 2016 presidential election approached, he was voiceless. That didn’t stop him from working: He conducted interviews through written words and wrote, rather than spoke, his stories.

Still, he wanted to find out what was happening to him. He visited hospitals searching for a diagnosis. Finally, last year, the head of the voice center at the Ohio-based Cleveland Clinic diagnosed him with tongue protrusion dystonia, a rare neurological condition that causes the tongue to protrude and the throat to close when the brain sends the signal to speak.

“He said it was so rare that he had no doctors to recommend for further treatment,” Dupree said.

In December 2017, Rep. Ileana Ros-Lehtinen, of Miami, Florida — who’s known Dupree for more than two decades — rallied for his cause on the House floor.

The publicity surrounding the speech led to talks with CereProc. Normally, to create a voice, CereProc clients have to record themselves speaking, something impossible for Dupree.

But he had years of audio recordings from his time on air.

“We used his archived radio reports as the source material for the voice,” said Graham Leary, who used the recordings to build Dupree’s digital voice for CereProc.

Within weeks, the voice was ready to go.

Ros-Lehtinen said Dupree’s story is an inspiration for people stricken with disease. She’s happy he found a solution that allows him to keep listeners informed about what’s going on in the nation’s capital.

“I look forward to more tough questions from Jamie and hearing his voice — even if in digital form — again,” she said.

When Dupree got word that his new voice was ready on May 10, he was in Atlanta visiting a friend. While waiting for his plane back to Washington, he downloaded the software, donned his earphones and typed: “My name is Jamie Dupree. This is my new voice.” The computer spoke back the words back to him.

“Yes, it sounds slightly robotic, but I could hear myself in those words,” Dupree said. “I quickly sent audio clip to my kids, including all of their names, so they could hear it as well.”

Dupree said his new voice gives him more than just the chance to resume his career on the airwaves; it also allows him to resume communication in other areas of his life. Software updates will be made to his digital voice, and he was set to receive an updated version Friday.

“This is about so much more than me not being on the radio,” he wrote.

But he still hopes someday to regain the ability to speak on his own, without technology. He wrote, “I still would like my real voice to return as well.” /muf