Japan envisions cars in the sky by 2020s 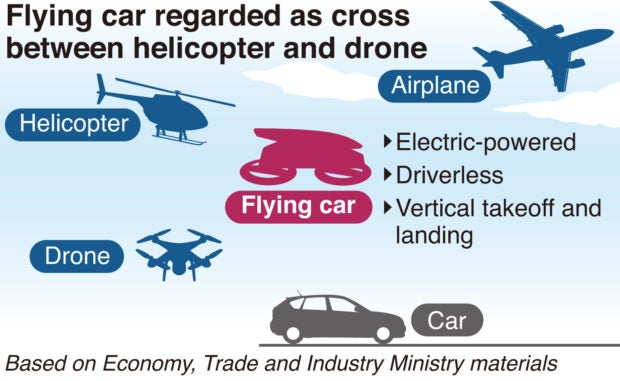 TOKYO — In a bid to achieve the practical use of self-driving flying cars (see below) in the 2020s, the government will establish a public-private council possibly within this year to discuss safety issues, technological development and other matters, The Yomiuri Shimbun has learned.

The government envisions such cars will reduce traffic congestion in urban areas and assist with disaster management. The council will support the realization of flying cars amid intensifying global competition over the development of related technology.

Flying cars are thought to combine elements of drones and helicopters. They are envisioned as taking off and landing vertically, and flying at altitudes of about 150 meters at 100 to 200 kph. Since they will be electric-powered, they will cost less to repair and maintain than cars with gasoline engines. As the cars will be self-driving, driver-training costs will also disappear with transport costs expected to be comparable to that of taxis, according to sources.

If put into practical use, flying cars are expected to reduce traffic congestion and be used in the event of disasters. Immediately following a recent earthquake in northern Osaka Prefecture, traffic congestion blocked the passage of emergency vehicles and obstructed reconstruction work. However, flying cars would enable rescue activities and the transport of goods to take place immediately without waiting for the restoration of damaged roads.

The futuristic vehicles could also be deployed to mountains and their surrounding areas, and to remote islands where land transport is inconvenient. As they will not produce engine noise, noise pollution will also be reduced when they fly over densely populated areas.

Ensuring safety remains the biggest challenge. The Economy, Trade and Industry Ministry, the Land, Infrastructure, Transport and Tourism Ministry, the manufacturing and distribution sectors and other entities are scheduled to participate in the public-private council. They will discuss concrete safety standards, developing the technology needed to electrify flying cars, how to make them self-driving and the construction of takeoff and landing sites, among other issues.

It is highly likely that flying cars will be considered “aircraft” subject to regulation under the Civil Aeronautics Law. Strict safety standards are required for aircraft. For example, airworthiness certification inspections, which confirm the strength and performance of airframes, are obligatory. The certification is usually valid for one year.

The council plans to outline its future vision for flying cars by presenting a timetable for drafting safety standards, thereby encouraging private companies to participate in development.

Companies around the world have already embarked on the development of relevant technology. The major European aircraft manufacturer Airbus S.A.S. and major U.S. vehicle services company Uber Technologies Inc. are scheduled to put flying cars into practical use in 2023. In Singapore, a country with limited land, the public and private sectors are jointly conducting verification projects so the vehicles efficiently use airspace.

In Japan, Cartivator, a volunteer organization staffed by young engineers from Toyota Motor Corp. and other firms, is promoting the development of flying cars with the aim of holding an exhibition at the 2020 Tokyo Olympics and Paralympics.

Although there is no clear definition for flying cars, they are generally characterized as electric-powered, self-driving and landing and taking off vertically, among other features. They are envisioned to fly to preset destinations, using sensors to dodge birds and other obstacles. They will not necessarily be able to drive on roads, but are nonetheless called “cars” because they will carry people and goods.