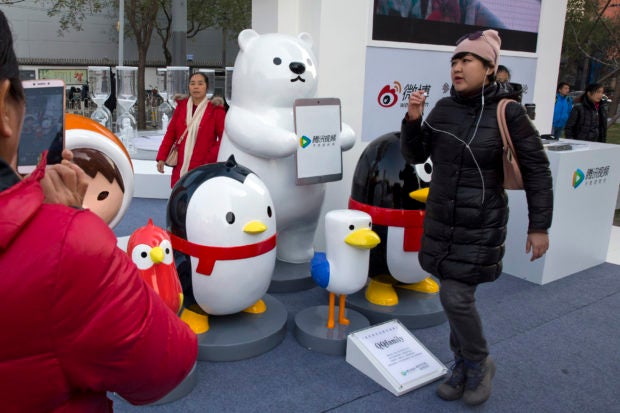 In this Nov. 20, 2017 photo, a woman wears her earphones as she walks past mascots representing the various platforms owned by Chinese internet conglomerate Tencent Holdings Limited during a promotion of Tencent Video, a video streaming service, in Beijing, China. AP

BEIJING — Tencent, China’s most valuable tech company and the operator of the popular WeChat social media platform, says it plans to spin off its streaming music service on a US stock exchange.

The company said in a statement issued through the Hong Kong stock exchange that the share price and other details of the stock offering in Tencent Music Entertainment Group have yet to be decided.

Tencent Holdings Ltd.’s other businesses include WeChat and online games and video. Most of its activity is concentrated in its faster-growing home market in China but the company is gradually expanding abroad.

The company, headquartered in the southern city of Shenzhen, reported a first-quarter profit of 23.3 billion yuan ($3.7 billion).

Tencent’s stock market value on Monday was $480 billion, placing it among the 10 most valuable publicly traded companies globally. /ee