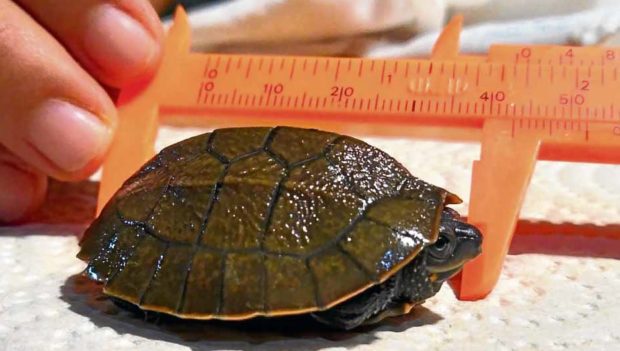 HATCHLING A scientist measures the length of a newly hatched Palawan forest turtle. The Wildlife Reserves Singapore and its partner, the Palawan-based Katala Foundation Inc., have embarked on a conservation and breeding program for the critically endangered freshwater turtle species. —PHOTO COURTESY OF KATALA FOUNDATION INC.

Illegal wildlife trade and destruction of Palawan’s forests had diminished the population of the forest turtles (Siebenrockiella leytensis) to at least 6,000 in the province as of 2015.

“The recent breeding success is a true milestone in the conservation of this important species, and gives us hope that we can turn things around even for lesser known species in this region,” Dr. Sonja Luz of the Wildlife Reserves Singapore (WRS) said in an announcement.

The WRS and its partner, the Palawan-based Katala Foundation Inc., which embarked on a conservation and breeding program for the freshwater turtle, announced the successful hatching of one egg.

Turtles rescued from wildlife traffickers more than 10 years ago are under their care, the conservationists said.

Dr. Sabinne Schoppe, director of Katala’s Palawan Freshwater Turtle Conservation Program, said the research work had given them “better understanding” about the turtle, such as their food preferences, incubation and nesting requirements, and the necessary environmental conditions for reproduction.

For instance, the turtle is “extremely sensitive” to stress and has “high requirements to captive environments” for reproduction, she said.

The Palawan forest turtle is one of the world’s “rarest and least known” turtles, according to the Turtle Conservation Fund, an international group of conservation organizations.

Endemic to Palawan province, it is considered critically endangered by the International Union for the Conservation of Nature.

Only three specimens were supposedly collected from Leyte province in 1921, but the species was rediscovered in 1988 and again in 2004 in Palawan.

But the rediscovery of the species resulted in its illegal trade for collectors, hobbyists and traditional medicine markets. This reduced the population faster than the species could be further studied and assessed.

The Palawan forest turtle relies on specific habitat for survival: streams in peat swamp forests, which are waterlogged forests that grow on a layer of dead leaves and plant material up to 20 meters thick.

As of 2015, the turtle’s wild population is estimated by Katala at 6,000, restricted to only five municipalities in Palawan.

According to Schoppe, the turtle remains highly sought as a pet, with some online traders falsely claiming that this has been bred in captivity to avoid prosecution.

“Captive breeding implies the production of offspring from parents under human care,” she said.

The WRS’ conservation program with Katala also included the critically endangered Palawan cockatoo. —WITH A REPORT FROM INQUIRER RESEARCH