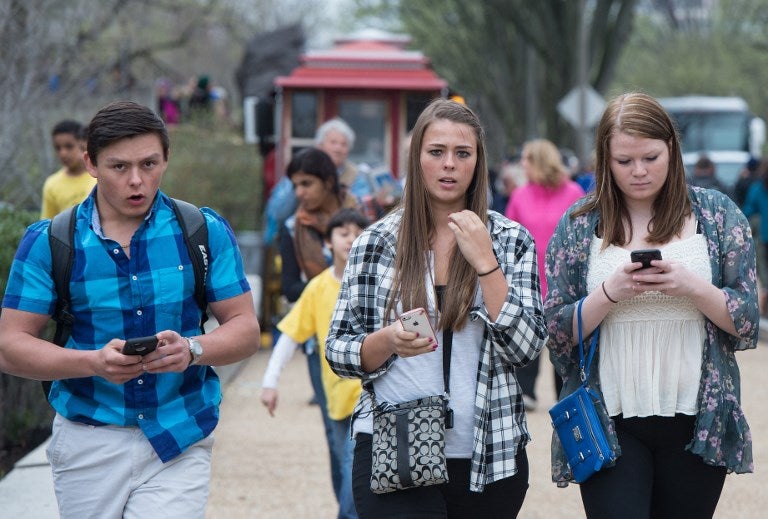 Three teens walk with their smartphones as they walk outside the Natural History Museum in Washington on April 8, 2015. A Pew Research Center survey released found that 92 percent of US teens go online daily. The survey of teens between the ages of 13 and 17 found that 73 percent had a smartphone and 30 percent had at least a basic cellphone. AFP

A new study out Tuesday says digital overload could be linked to a “modest” but significant rise in new ADHD behaviors, offering a warning to parents about the potential dangers of too much screen time.

The findings in the Journal of the American Medical Association were based on nearly 2,600 Los Angeles teens who answered survey questions over a two-year period — making it one of the largest and longest studies on the topic to date.

The more social media, streaming video, text messaging, music downloads or online chats they engaged with, the more likely they were to report symptoms like difficulty organizing and completing tasks, or trouble remaining still.

In contrast, 4.6 percent of students who were not frequent users of any digital activity showed ADHD symptoms.

Researchers cautioned that the rise in ADHD symptoms was “modest” and at least some of the effect might be explained by confounding factors.

Also, since the study was observational in nature and was based on survey responses by the teens themselves, researchers said they could not prove that smartphone use actually caused ADHD symptoms.

Still, the findings offer a solid basis for more research because “this was a statistically significant association,” said Adam Leventhal, a professor of preventive medicine and psychology at the University of Southern California.

“We can say with confidence that teens who were exposed to higher levels of digital media were significantly more likely to develop ADHD symptoms in the future.”

Previous studies have shown that ADHD, a psychiatric condition involving persistent difficulty sustaining attention, hyperactivity and impulsivity, affects about seven percent of youths in the United States and may be on the rise in some populations.

According to Jessica Agnew-Blais, a postdoctoral research fellow at the Institute of Psychiatry, Psychology and Neuroscience at King’s College London, the authors were “rightfully cautious not to over-interpret” their findings.

“It is worth noting that over 80 percent of students reported high frequency use of digital media, and the vast majority of these students do not have elevated ADHD symptoms.”

Another expert who was not involved in the study, Andy Przybylski, an associate professor at the Oxford Internet Institute, University of Oxford, described the research as “interesting” but “tentative.”

“The study is a proof of concept that tells us we need very large samples when we design future studies because the possible effects are extremely small,” he said.

The next studies on the topic should move away from self-reported survey answers and include clinical diagnoses and external measurements of device use, experts suggested. /cbb