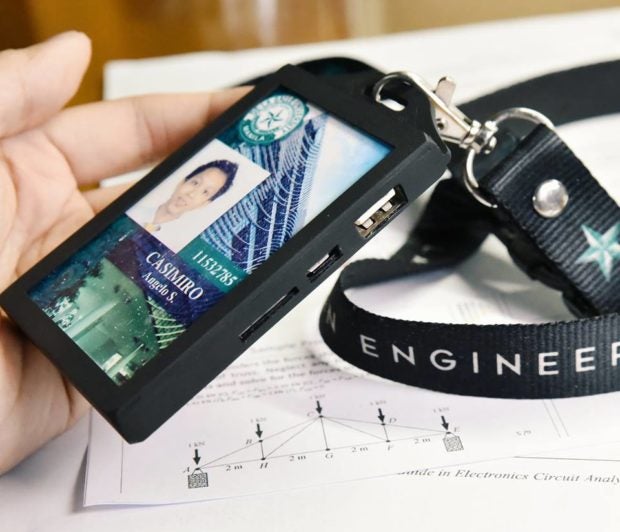 Chargee, the ID case that has a flash drive and power bank. PHOTO from Angelo Casimiro’s Facebook page

A Facebook post about an identification (ID) card case which has a 128GB flash drive and a 1,900mAh power bank has gone viral. As of this writign, the post has garnered 43,000 likes and 30,000 shares.

Angelo Casimiro, an Electronics Engineering student of De La Salle University, posted the photos on Sunday, not expecting the overwhelming response from netizens.

“I posted it in my personal profile since I just wanted to show it to my friends in campus who also loves technology. I didn’t expect it to go viral real fast,” Casimiro said in an online interview.

Casimiro said he got the idea from a group of Industrial Engineering students: David Zinampan, Ivan Yeung, Sarah Tan, Andreana Santos, and Celine Solis, who asked him to create a model for their group project.

“David approached me with the idea for their school project. The moment he told me his concept, I knew he was up to something. I told him I could make a 3D printed version for them,” Casimiro added.

According to Yeung, the idea started as a joke. The group eventually realized that their idea has potential.

“David jokingly said to make an ID holder with power bank. I guess he was also surprised because we all liked the idea,” said Yeung.

The group decided to name the product “Chargee,” It has a 128GB flash drive and a 1,900mAh power bank, which means a simple yet effective way of solving most students’  problems – emergency charging and misplacing flash drives.

“The idea was basically to provide emergency charging for people. Since when we walk around school, we always have our IDs and phones [with us], but no one really thinks of bringing a power bank everywhere they go,” Solis said.

Like Casimiro, the group also did not expect the product to generate such interest from people who usually wear IDs such as students and corporate workers.

“We didn’t expect that it would catch this much attention, because when we were presenting it in class. There were a lot of questions about Chargee,” Tan said, noting that there was even a bit of a doubt from the class when Chargee was presented.

The group has not yet decided whether they will sell their product to the public or not, but if they do, they said their potential target market would be students and primary users of ID holders.  —  Syrah Vivien Inocencio/INQUIRER.net Intern