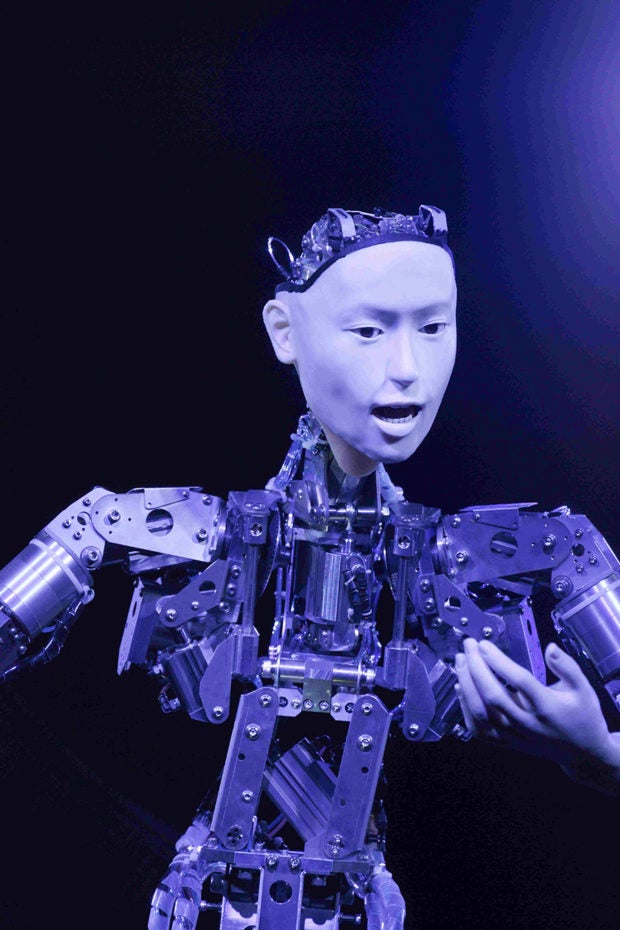 TOKYO — The android opera “Scary Beauty,” directed by musician Keiichiro Shibuya, was performed at the National Museum of Emerging Science and Innovation, known as Miraikan, in Koto Ward, Tokyo, on Sunday night.

As the android “the Alter 2” powered by artificial intelligence both sang and conducted a 30-member orchestra, the event provided audiences with an opportunity to reflect on the modern relationship between humans and technology.

“There is no special right to happiness and none to unhappiness. There is no tragedy and there is no genius.” The Alter 2 sang these words, which come from Yukio Mishima’s posthumous novel “The Decay of the Angel (Tennin Gosui),” in an artificial voice.

As the android occasionally extended its arms and mechanically shifted its waist, shoulders and other body parts, a magnificent musical scene emerged in which an orchestra, piano and computer programming joined together.

The Alter 2 was jointly created by Osaka University Prof. Hiroshi Ishiguro, University of Tokyo Prof. Takashi Ikegami and others. The most important aspect of the production was said to be programming the android’s movements so that orchestra members recognized them as directions.

Shibuya, who played the piano and composed the score, and others realized the importance of programming the android so that its waist and shoulder movements resemble human breathing movements. This allowed the orchestra to follow it more easily.

“Initially we focused only on how conductors move their arms. However, after adding shoulder and waist movements to the android, it become easier for humans to understand the android’s directions,” Shibuya said.

Contemporary music composer Motoharu Kawashima, who participated in the project as an orchestral supervisor, said: “It was a challenge for humans to recognize the android’s movements as that of a conductor. Having the shoulder and waist movements resemble breathing movements was important for the android-human collaboration.”

Organizers are considering holding overseas performances in the future. “We’ve already received inquiries from other countries,” Shibuya said. “I think it’s important for the orchestra — the human side — to be enthusiastic about collaborating with an android.”