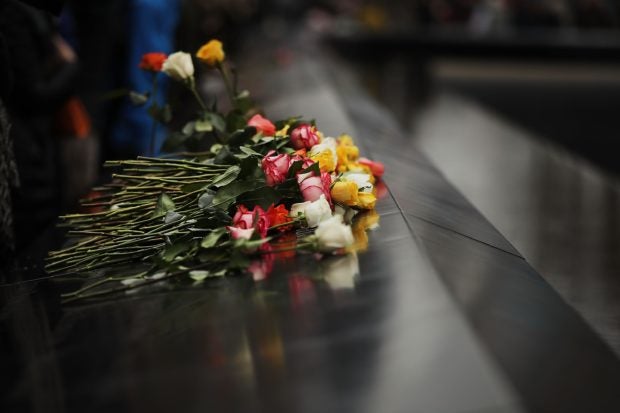 Flowers are placed on the names inscribed on the north reflecting pool of the National September 11 Memorial for those killed in the February 26, 1993 truck bomb attack at the World Trade Center on February 26, 2018 in New York City. An annual memorial service was held today, on the 25th anniversary of the attack, to mark the event in which six people were killed and more than 1,000 injured. The bomb, which exploded in an underground parking garage, was set off by Muslim extremists who were later brought to justice. On September 11, 2001 the World Trade Center was attacked again. Spencer Platt/Getty Images/AFP

New York, United States – Seventeen years after the September 11, 2001 attacks, the remains of a 26-year-old finance worker killed in New York has been formally identified thanks to advances in DNA testing, officials announced Wednesday.

Scott Michael Johnson is the 1,642nd person to be identified of the 2,753 people killed when two passenger jets, hijacked by Al-Qaeda, destroyed the Twin Towers at the World Trade Center, the symbol of New York’s financial wealth.

“You get pulled right back into it and it also means there’s a finality. Somehow I always thought he would just walk up and say, ‘Here I am. I had amnesia’,” his mother, Ann Johnson told The New York Times.

It was the first identification since August 2017, although that man’s identity was not publicly revealed at his family’s request.

“We made a commitment to the families of victims that we would do whatever it takes, for as long as it takes, to identify their loved ones,” Sampson said.

While more than 1,100 9/11 victims remain unidentified, DNA technology has led to 89 percent of all positive identifications, the medical examiner’s office said.  /kga