Birds learn another ‘language’ by eavesdropping on neighbors 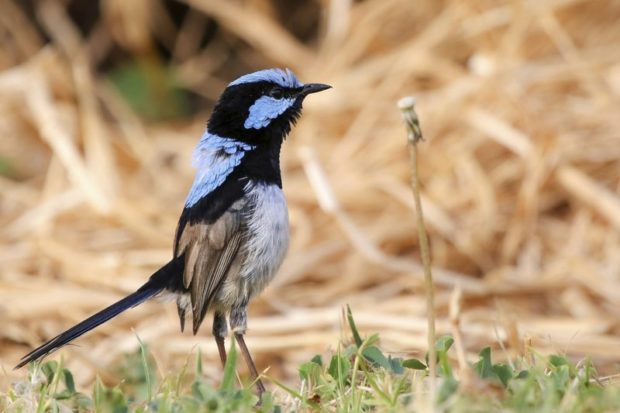 This photo provided by Jessica McLachlan shows a fairy-wren. Scientists have discovered that birds can learn to recognize alarm calls of other species, essentially by learning to eavesdrop in a second language. The Australian songbird called the fairy wren isn’t born knowing other birds’ chirps, but it can learn to recognize a few “words.” In a paper published Thursday, Aug. 2, 2018, in the journal Current Biology, scientists explained how they taught the birds the distress calls of other species.(Jessica McLachlan via AP)

WASHINGTON — For birds, understanding neighborhood gossip about an approaching hawk or brown snake can mean the difference between life and death.

Wild critters are known to listen to each other for clues about lurking predators, effectively eavesdropping on other species’ chatter. Birds, for example, can learn to flee when neighbors cluck “hawk!” — or, more precisely, emit a distress call.

The fairy wren, a small Australian songbird, is not born knowing the “languages” of other birds. But it can master the meaning of a few key “words,” as scientists explain in a paper published Thursday in the journal Current Biology.

“We knew before that some animals can translate the meanings of other species’ ‘foreign languages,’ but we did not know how that ‘language learning’ came about,” said Andrew Radford, a biologist at the University of Bristol and co-author of the study.

Birds have several ways of acquiring life skills. Some knowledge is innate, and some is acquired from direct experience. Radford and other scientists are exploring a third kind of knowledge: acquiring information from peers.

Bradford and colleagues at Australia National University wandered around the Australian National Botanic Gardens in Canberra with customized “tweeter speakers” affixed to their wrists, looking for solitary fairy wrens. They wanted to be certain that the birds would react only to sounds, not other birds’ behavior.

The scientists first played the birds two unfamiliar recorded sounds. One was the alarm cry of an allopatric chestnut-rumped thornbill, a bird not native to Australia. The other was a computer-generated bird sound dubbed “buzz.”

On first hearing these sounds, the 16 fairy wrens had no particular reaction.

The scientists then trotted around the park and continued to play customized recordings. They attempted to train half the birds to recognize the thornbill’s alarm cry as a warning sound, and the other half to recognize the computer-generated “buzz” as a distress call. They did that by playing the previously unfamiliar sounds in conjunction with noises that the birds already associated with danger, such as fairy wrens’ own distress cry.

After three days, the scientists tested what the birds had learned — and their feathered pupils passed the test.

The two sets of fairy wrens responded to the sound they had been trained on by fleeing for cover, but remained indifferent to the other sound.

Twelve of the 16 birds fled at every playback; the other four birds fled in response to two-thirds or more of the playbacks.

To put it in human terms, it’s as though a person who only speaks English had learned that “Achtung” means “attention” or “danger” in German simply by listening to people yell phrases with similar meanings in multiple languages at once.

“Until this study, we had limited knowledge about how an animal learns what calls from other species actually mean,” said Christopher Templeton, a biologist at Pacific University in Forest Grove, Oregon, who was not involved in the study.

Previous research had shown that fairy wrens could learn the meaning of distress calls when actually encountering a predator.

“What this new study does is remove the predator entirely. It shows that these birds can learn to associate new sounds with danger, without having to learn through trial and error,” said Templeton.

In other words, one bird’s distress tweet can go viral.

“If you can only learn in the presence of a predator, that’s quite dangerous,” said Radford, the study co-author. “The capacity to learn by associating sounds with meaning makes sense, biologically.”            /kga