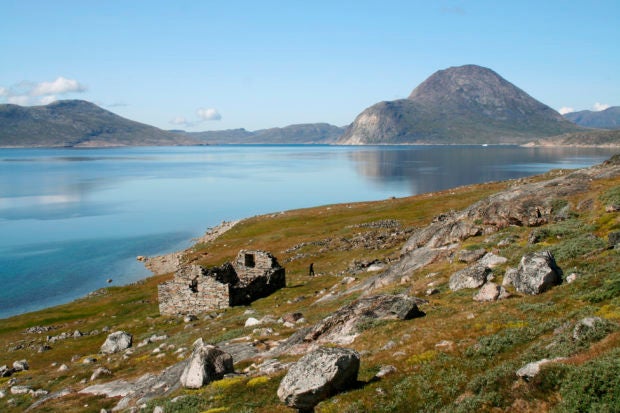 This 2009 photo provided by Christian Koch Madsen shows the ruins of the Hvalsey Church, part of an abandoned Viking colony, in southern Greenland. For almost five hundred years, the Norse descendants of Erik the Red built churches and manor homes and expanded their settlements on the icy fringes of European civilization. Christian Koch Madsen via AP

WASHINGTON — Clues to the mystery of why Viking colonies in Greenland flourished and fell have been found in the DNA of medieval walrus bones housed in more than a dozen European museums.

For almost 500 years, the Norse descendants of Erik the Red built churches and manor homes and expanded their settlements on the icy fringes of European civilization. On Greenland, they had elaborate stone churches with bronze bells and stained glass, a monastery, and their own bishop. Their colonies at one time supported more than 2,000 people.

And then they vanished.

Scholars have long wondered why.

“Why did they flourish and why did they disappear?” asked Thomas McGovern, an anthropologist at Hunter College in New York. “And did their greatest success also contain the seeds of their demise?”

Researchers who visited museums across western Europe to assemble a rare pile of artifacts — fragments of medieval walrus skulls — reported in a study in Wednesday’s Proceedings of the Royal Society B that the fate of these medieval outposts may have been tied to the demand for walrus ivory among rich Europeans.

The study revealed that during the height of the Norse settlement — from about 1120 to 1400 — at least 80 percent of the walrus samples were directly sourced from Greenland.

“It’s possible that almost all the walrus ivory in western Europe during the High Middle Ages came from Greenland,” said Bastiaan Star, a scientist at the University of Oslo and one of the study’s authors. “This result tells a very clear story.”

A dozen years ago, many historians believed that the changing climate of medieval Europe was the main reason Norse settlements in Greenland expanded and went extinct. This view was popularized in Jared Diamond’s 2005 book “Collapse.”

But evidence such as walrus bones at archaeological sites in Greenland and historical documents — including church records of tithes paid in walrus tusks — suggested another possible factor: that the Vikings’ descendants thrived on a lucrative trade in walrus tusks, which were sold to Europe’s elite and carved into luxury items, such as ivory crucifixes, knife handles, and fancy dice and chess sets.

Archaeologists suspected that famous ivory artifacts from the Middle Ages — such as the Lewis Chessmen, a set of expressive and intricately carved statuettes from the 12th century now housed in the British Museum in London — were made from walrus tusks from Greenland. But they could not get permission to bore into these precious artifacts for genetic analysis.

James Barrett, another study author and an archaeologist at the University of Cambridge, was “opening dusty boxes and poring through museum catalogues” in galleries in Norway, France, Germany, Ireland, and the UK when he realized that the tusks were often sold attached to fragments of walrus skulls — and that the bone could provide the DNA he needed. Barrett didn’t get access to the Lewis Chessmen, but his hunt produced 23 medieval artifacts for analysis, after examining hundreds of related objects.

“This is the first study that conclusively shows that Greenland walrus exports obtained a near-monopoly in Europe,” said Poul Holm, an environmental historian at Trinity College in Dublin, who was not involved in the study.

McGovern, also not part of the study, said of the research: “It’s changing the story that we’ve been telling for years.”

If walrus ivory was the key to Greenland’s medieval wealth, experts now suspect a collapsing market for the ivory may have helped doom the outposts. The Norse Greenland settlements vanished in the 1400s, sometime after life in continental Europe was badly rattled by the onset of the Black Death and the beginning of the Little Ice Age, an era of cooler climates. These calamities undermined demand for walrus ivory, said Barrett.

After “a bonanza tied to the novelty of bringing exotic products to the market” in Europe, Holm said, “the fading allure of the product locks the society in decline.” /kga