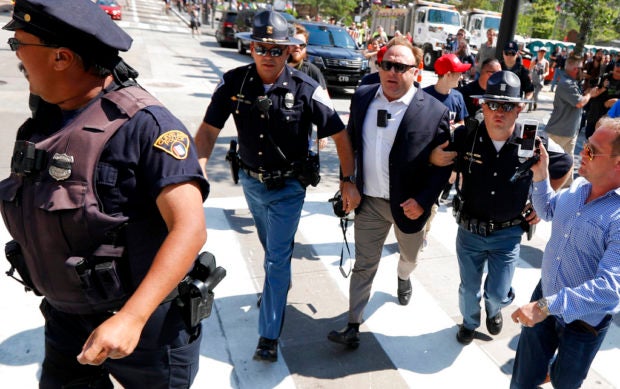 In this  July 19, 2016 file photo, Alex Jones (center right) is escorted by police out of a crowd of protesters outside the Republican convention in Cleveland.  AP

LONDON — Twitter CEO Jack Dorsey defended his company’s decision not to ban right-wing conspiracy theorist Alex Jones and his “Infowars” show, saying he did not break any rules.

“We didn’t suspend Alex Jones or Infowars yesterday,” Dorsey said. “We know that’s hard for many but the reason is simple: he hasn’t violated our rules. We’ll enforce if he does.”

Dorsey was responding after Facebook, Apple, YouTube and Spotify took down material over the past week published by Jones, reflecting more aggressive enforcement of their hate speech policies and raising pressure on Twitter to do the same.

“We’re going to hold Jones to the same standard we hold to every account, not taking one-off actions to make us feel good in the short term, and adding fuel to new conspiracy theories,” Dorsey said.

Dorsey said he wanted Twitter to avoid succumbing to outside pressure but instead impartially enforce straightforward principles “regardless of political viewpoints.”

Jones, who has 858,000 followers on Twitter, has built up his profile while promulgating conspiracy theories. His claims include that the 9/11 terror attacks were actually carried out by the government and that the 2012 Sandy Hook mass school shooting, which left 20 children and six adults dead, was a hoax.

Dorsey said that it’s the responsibility of journalists to “document, validate, and refute” rumors and sensationalized issues spread by accounts like Jones’s so “people can form their own opinions.” /ee /atm