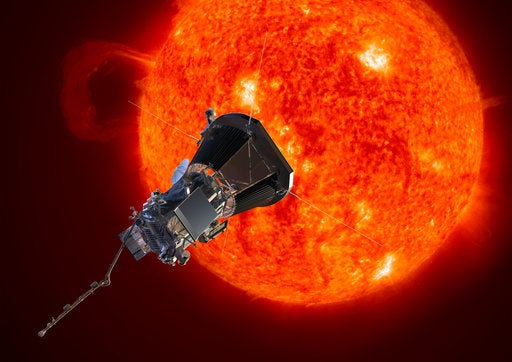 This image made available by the Johns Hopkins University Applied Physics Laboratory on Wednesday, May 31, 2017 depicts NASA’s Solar Probe Plus spacecraft approaching the sun. On Wednesday, NASA announced it will launch the probe in summer 2018 to explore the solar atmosphere. It will be subjected to brutal heat and radiation like no other man-made structure before. AP FILE

TAMPA, United States – After a last-minute technical problem forced NASA to postpone by 24 hours the launch of its first mission to explore the Sun, the agency plans to try again Sunday.

The new, 60-minute launch window opens at 3:31 am (0731 GMT) for the Parker Solar Probe, a $1.5 billion unmanned spacecraft that aims to get closer than any human-made object in history to the center of our solar system.

The probe is designed to plunge into the Sun’s mysterious atmosphere, known as the corona, coming within 3.83 million miles (6.16 million kilometers) of its surface during a seven-year mission.

It is protected by an ultra-powerful heat shield that can endure unprecedented levels of heat, and radiation 500 times that experienced on Earth.

The car-sized probe is designed to give scientists a better understanding of solar wind and geomagnetic storms that risk wreaking chaos on Earth by knocking out the power grid.

Saturday’s scrub was caused by a helium gas sensor that surpassed a launch limit on the Delta IV-Heavy rocket, United Launch Alliance said.

The weather forecast was expected to be about 60 percent favorable for launch, according to ULA. /cbb