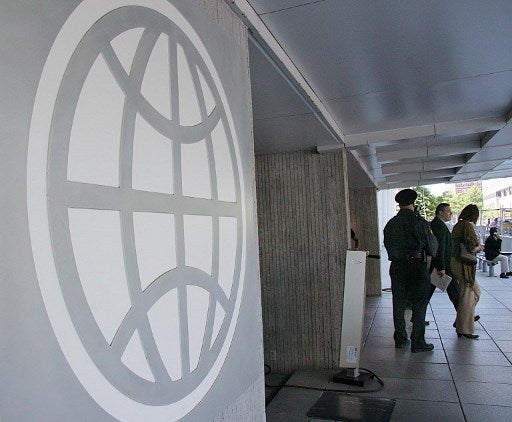 The logo of the World Bank is seen at the entrance to the building on  08 May, 2007 in Washington, DC.  AFP

The World Bank is taking a step into the brave new world of digital finance to sell the first-ever bond to be issued entirely using blockchain technology, the bank announced Friday.

More than just funds, the World Bank aims to gain experience using blockchain — a digital public registry of transactions — that could lead to “a golden future” for financial services for developing nations, a bank official told AFP.

The technology is most often associated with cryptocurrencies — like bitcoin — which often raise suspicion about their reliability and volatility, as well as their use for criminal purposes.

But because there as yet is no central bank-backed digital currency in existence, the two-year blockchain bond will rely on real-world money: Australian dollars.

The Washington-based development lender aims to raise about Aus$50 million (about $36 million), although it could be double that if more investors get involved before the bond is finalized the week of August 20.

“Since our first bond transaction in 1947, innovation and investor satisfaction have been important hallmarks of our success with leveraging capital markets for development,” World Bank Treasurer Arunma Oteh said.

“Today, we believe that emerging technologies, equally offer transformative, yet prudent possibilities for us to continue to innovate, respond to investor needs and strengthen markets.”

The transaction is the brainchild of the World Bank’s innovation lab, which has been working on the issue for nearly a year, together with the Commonwealth Bank of Australia.

The institution also partnered with Microsoft, which will ensure the platform and software are “solid, bug free, and have no vulnerabilities to attack,” said Paul Snaith, manager of the World Bank’s Treasury Operations Capital Markets.

He said use of blockchain could improve transparency, since it is public, and cut down on transaction time since the bonds eventually will be exchanged instantaneously for cash.

For now, though, investors still have to register and all cash will be transmitted separately from the blockchain through “normal channels,” the old fashioned way.

The two-year life of the blockchain bond will provide “quite a few learning events and opportunities,” he said. /ee