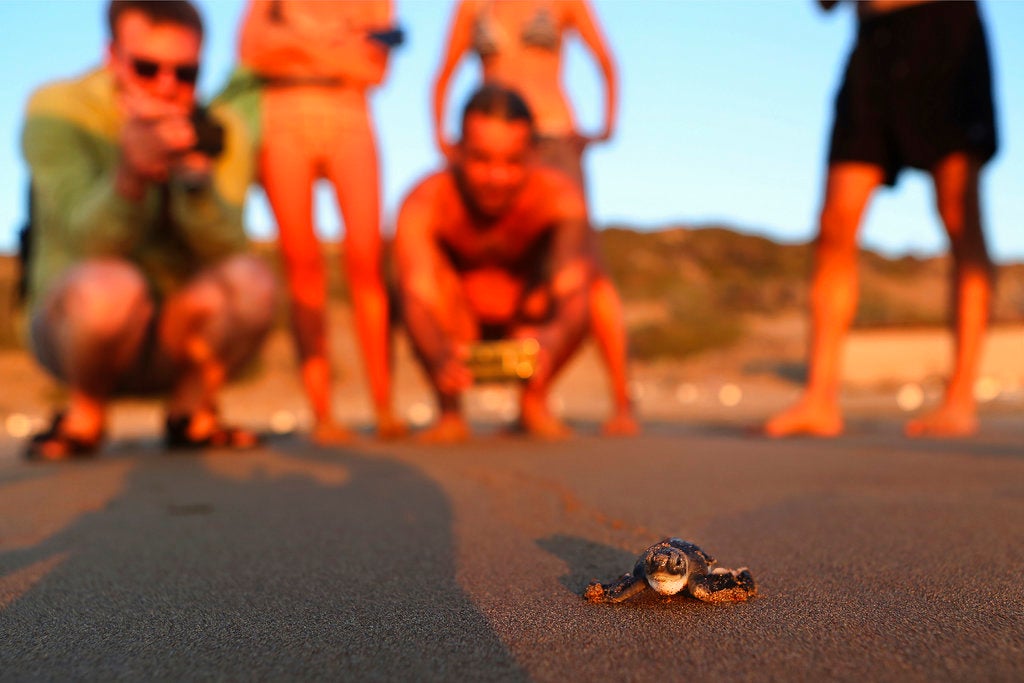 In this photo taken on Thursday, Aug. 9, 2018, beachgoers observe a tiny sea turtle that just hatched trying to reach the Mediterranean’s warm waters on Cyprus’ protected Lara beach. Cyprus’ Green and Loggerhead turtles have made a strong comeback thanks to pioneering conservation efforts stretching back decades, with the increase in numbers all the more remarkable for the Green turtle given that it only lays eggs in Cyprus and Turkey. (AP Photo/Petros Karadjias)

LARA BEACH, Cyprus — For these ancient reptiles, a stretch of beach on the Mediterranean island of Cyprus has been their home for thousands of years.

Against the setting sun, the tiny turtles that have just hatched on Lara Beach strain against the surf to reach the Mediterranean Sea and embark on their life’s journey.

And in 20 to 30 years, they’ll be back at this exact location to lay their own eggs.

After being hunted to near extinction in the first half of the last century, the Mediterranean’s endangered Loggerhead and Green turtles are making a comeback thanks to pioneering conservation efforts, Cypriot marine biologists say.

When those efforts began in 1978, there were just 300 turtle nests on the island’s beaches where the reptiles return to lay their eggs. The population has grown to around 1,100 nests last year, said Andreas Demetropoulos, the founder and co-head of a turtle conservation program under the island-nation’s Fisheries and Marine Research Department.

That may not sound a lot, but with the turtles’ reproductive cycles stretching out as long as three decades, the results are “quite spectacular,” said Demetropoulos.

According to marine biologist and conservation program co-head Myroula Hadjichristophorou, Cyprus has 200-300 Green turtles who lay eggs while the number for Loggerheads is more than double that.

Cyprus instituted its conservation program long before any other EU member and that has paid dividends, said Hadjichristoforou. Efforts include guarding against the turtles’ main predator — foxes — and passing crucial legislation in 1989 that allowed conservationists to protect two key beaches in the island’s west and northwest, keeping curious locals and tourists at bay.

Before this, residents would camp on the beach and fire up barbeques with little concern for the turtles. But over time, Hadjichristophorou says the region has built up a conservationist culture — from schoolkids to adults — so that folks who spot something like an injured turtle notify the authorities immediately.

Turtles have been around for 200 million years on Earth but have called the Mediterranean home only for about 10,000 years, said Hadjichristophorou.  Remarkably, the turtles’ own ingrained “biological GPS” brings them back to lay their eggs to the same beaches that their ancestors chose thousands of years ago.

“When people come here with their families, their children, they see the babies coming out of their nests, this is something that they will never forget,” said Hadjichristophorou.  /muf