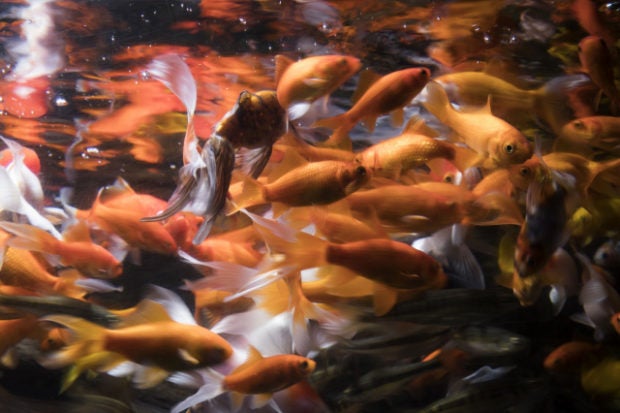 This picture taken on August 17, 2018 shows abandoned by individual keepers goldfish displayed after quarantine at the Aquarium in Paris. Image: AFP/Joel Saget

Paris’s biggest aquarium has created a refuge for goldfish, providing a second life for any unwanted pets who might otherwise find themselves flushed down the toilet.

The Aquarium de Paris allows the city’s residents to drop off their fish, with the numbers using the service swelling around the time of the long summer holidays.

Instead of facing death in the city’s sewerage system, the rejected goldfish find themselves given a full medical check up involving antibiotics and anti-parasite treatments.

After a month in quarantine, during which a minority succumb to the trauma caused by the change in location, they are then released into a giant tank where they go on display to the public.

“Some of them arrive very weak,” said Celine Bezault, who cares for the fish at the giant aquarium complex which is located opposite the Eiffel Tower.

Since it was created two years ago, the goldfish rescue service has been used by around 50 people a month and the tank now contains about 600 specimens, mostly the classic golden-red version, as well as striped and black ones.

Rather than spending all day banging into the glass of a small bowl, here the fish have space to swim and plenty of company, allowing them to socialize and move around in groups.

Some owners hand over their pets tearfully, motivated by concern for their fish, while others appear relieved to be rid of them and the routines of feeding and cleaning.

“It was in a small bowl and I think it’ll be better here,” a 32-year-old called Alexandre told an AFP reporter as he dropped off a friend’s goldfish called Nemo before the holidays. “It’s better than flushing it away.”

Once in the bigger tank, some of the fish undergo a remarkable transformation.

Being confined in a bowl stunts their growth, but the bigger space means some of them will expand to full adult size.

For Alexis Powilewicz, director of the Aquarium, the service is part of efforts to promote awareness about animal welfare.

Goldfish are domesticated forms of wild carp originally found in east Asia and the practice of keeping them in bowls has existed for hundreds of years. It is thought to have originated in China.

“I think there’s growing awareness that the mistreatment of animals is a real problem,” Powilewicz told AFP.

For goldfish owners, the aquarium advises that the tank should be at least 100 liters (20 gallons), should contain more than one fish, as well as a filtration system and decoration.

The animal rights group People for the Ethical Treatment of Animals (PETA) has long campaigned against keeping goldfish in bowls or giving away fish in plastic bags as prizes at funfairs.

In 2004, the Italian town of Monza made headlines when it banned putting goldfish in bowls, while Switzerland has animal rights legislation that makes flushing a fish down the toilet illegal.

For those who dispose of their pets in ponds or rivers, scientific studies have found that some goldfish thrive afterwards — but at a cost to the local ecosystem because the fish are an invasive non-native species.

In 2015, officials in the western Canadian province of Alberta launched a “Don’t Let it Loose” campaign, pleading with locals to stop releasing goldfish into the waterways.

The ethical disposal service available at the Aquarium de Paris is aimed at offering an alternative.

Owners are also able to return afterwards to try to spot their former pets: quite a challenge in a tank of 600. CC

From foes to friends of tropical fish