As the Philippines gears up to host the 30th Southeast Asian (SEA) Games next year, the logo for the upcoming sports event was unveiled during the 37th Olympics Council of Asia General Assembly last Sunday, Aug. 19.

The logo for the games was presented by chairman of the Philippines SEA Games Organizing Committee (PHISGOC), foreign affairs secretary Alan Peter Cayetano. His presentation was later posted on the Facebook page of the 30th SEA Games.

The logo shows 11 circles that apparently stand for the 11 rings of the SEA Games, all bound together in what was supposed to be the shape of the Philippine archipelago.

However, people had negative reactions to the logo, with some expressing their dissatisfaction with with and suggestions.

One commenter, Justin Glide, appears to have been reminded of the children’s song “Small circle, small circle, biiiiiiiiig circle.” 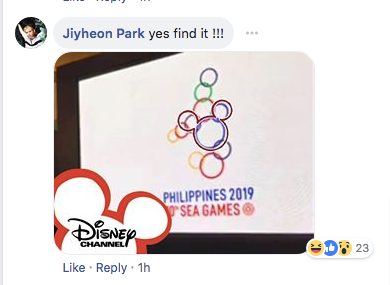 Popular parody page Malacañang Events and Catering Services posted that maybe the logo was inspired by a bunch of colorful rubber bands.

Another Facebook page (ULOLs) compiling funny posts thought that the bands may be from the toy waterful ring toss.

Meanwhile, designer Pol Divina had an alternative logo for the SEA Games, inspired by the beloved cartoon character Spongebob Squarepants.

Meanwhile, student Sydrich James Avecilla thought it was easy to remake the logo, just by using Paint on one’s computer.

While some were amused by the logo and readily poked fun at it, writer and University of the Philippines professor Rolando Tolentino had a darker take. Inspired by the government’s war on drugs, his alternative logo comprised of bullet holes rather than colorful circles.

Some seriously thought they could lend a hand to make the logo look better. Bob Freking (@bobfreking) on Twitter let out his creativity and used baybayin to spell out “SEA.”

“There are so many ways you can do a logo without going out of concept and color,” he said, while posting an image of his suggested design. In the end, he also jested, but may as well be serious when he wrote, “Bayaran niyo na lang ako (Just pay me).”

There are so many ways you can do a logo. Without going out of concept & color, here you go Philippines.

He also had another proposal, this time with the sun from the Philippine flag used as zero for the 30th SEA Games.

Another way of doing the logo. It's more text than symbol this time though.

P.S. Need someone to brand with you? I can help! pic.twitter.com/MoHeVpLzbC

Meanwhile, Twitter user @kvpingkian’s version of the logo is called the “Blazing Philippine Eagle,” which he said symbolizes strength and power. He explained: “It has 10 feathers representing the 10 countries participating in the event & the head symbolizes the host country. Blaze, symbolizes fire a start of something.”

My version of SEA GAMES LOGO

The eagle symbolizes strength & power. It has10 feathers representing the 10 countries participating in the event & the head symbolizes the host country. Blaze, symbolizes fire a start of something. #SEAGames2019 pic.twitter.com/gd9YWsL8IA

Another design, by @raphaelmiguel, was inspired by the country’s national bird. He said he drew it in less than 15 minutes.

“The official one looks like we didn’t even try to put effort. Shame,” he said about the logo presented by Cayetano.

Incorporated the SEA Games rings as per request. Thank you all for the warm appreciation! pic.twitter.com/aXai55p5dR

Is there hope for a better logo to come out and be used for good? The country awaits confirmation from the PHISGOC, which issued this statement through its social media and marketing team: “Pakisubaybayan natin sa Nov. 30 sa taong ding ito ang lahat ng kumpirmasyon.”

(Let’s all wait for Nov. 30 of this year for the full confirmation.) JB