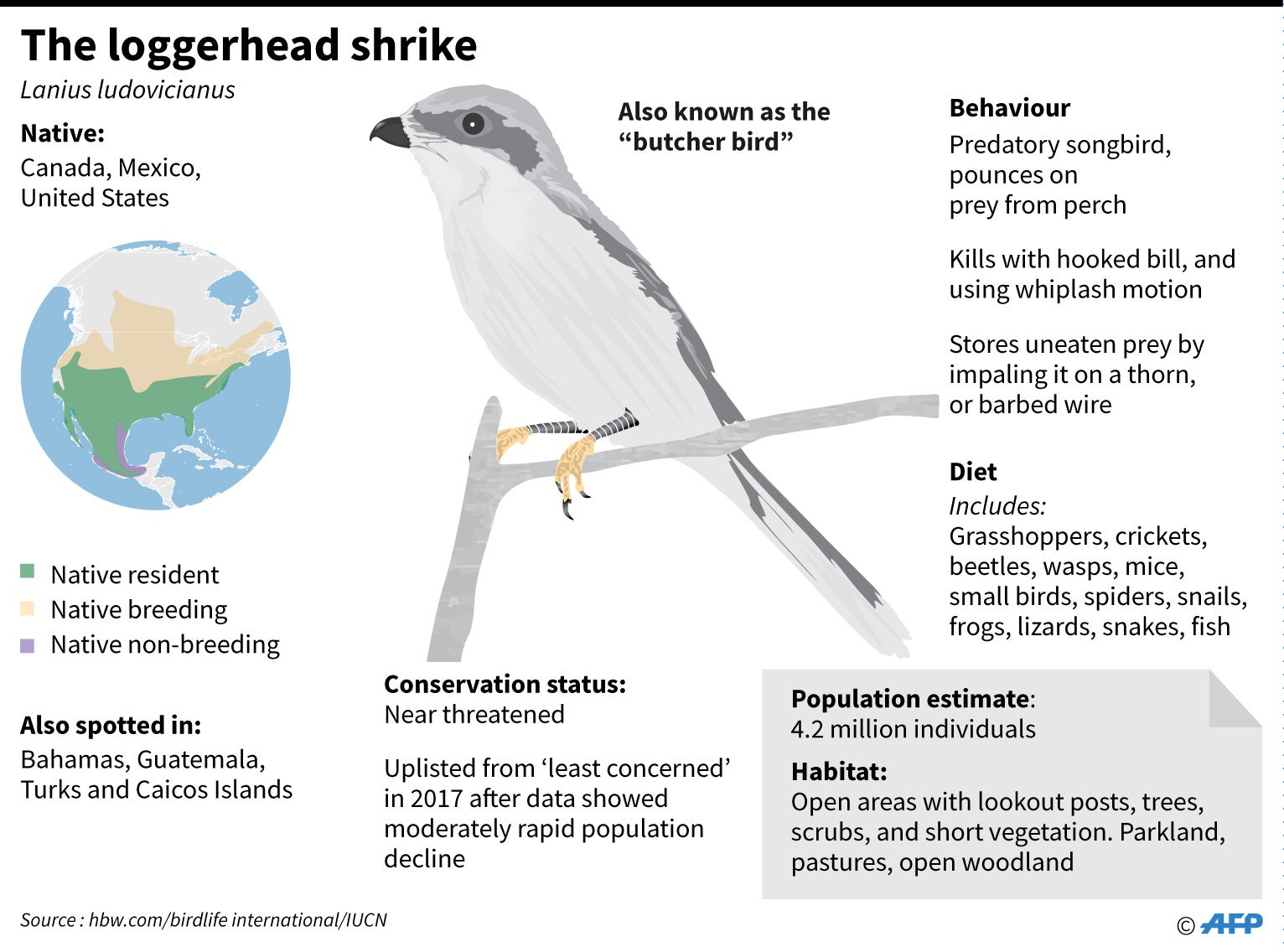 They may be small and striking, but shrikes are songbirds known for viciously impaling their victims with a razor-sharp bill although experts have long wondered about their ability to subdue much larger prey.

Now researchers say these carnivorous killers use powerful beak-and-jaw motions to shake their victims vigorously, whirling them around at speeds which cause injuries akin to whiplash.

“We already knew that they can kill surprisingly large animals for their size, but we didn’t know specifically how they do it,” said Dr Diego Sustaita, lead author of a study published in Wednesday’s Proceedings of the Royal Society journal.

Although shrikes have sharply hooked, falcon-like beaks which they jab into the head or neck of their prey, causing partial paralysis, they don’t have the large talons possessed by other birds of prey to help them finish the job.

But researchers at San Diego Zoo Institute for Conservation Research on California’s San Clemente island found clear evidence of violent shaking in a motion which uses the victim’s weight against it, Sustaita said.

“The way that shrikes shake their prey is likely to be important for immobilizing and killing it because the accelerations of the prey’s own body around its neck results in forces that could break or damage the neck,” he told AFP.

“The rate at which the shrikes shake their heads was surprising, especially with relatively large animals in their jaws!” he said, with the study suggesting the movement resulted in accelerations equivalent of around 6g-force.

For the study, researchers studied footage of attacks by 37 loggerhead shrikes involving live domestic black mice and other creatures. In 28 cases, they observed prey-shaking behavior with the results giving a clear indicator of how the birds subdued larger creatures.

“They help explain how a small songbird is able to kill relatively large animals in ways that differ from large raptors like hawks. Shrikes have some of the ‘equipment’ like the sharply-hooked beak, but not all, like the talons, and so they seem to have found another way to get the job done.”

Shrikes, he said, are disproportionately strong for their size but their ability to kill is actually more reliant on speed.

“As a group, shrikes can take prey larger than you would expect for their body sizes and ‘types’ — keep in mind, these are songbirds. You wouldn’t expect a robin, for instance, to have the strength to kill a mouse and they don’t,” he said.

“This particular behavior relies more on speed to generate accelerations to take advantage of the prey’s body weight, so it might not necessitate as much strength as it would seem.”  /muf