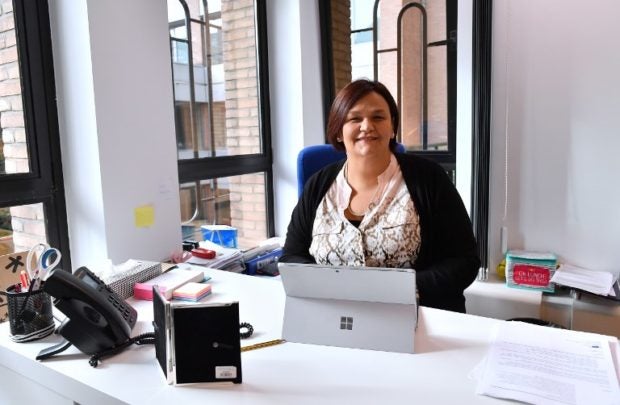 Siada el-Ramly, Director General of The European Digital Media Association (EDiMA), a lobby group for the tech sector, poses for a photo at her desk during an interview with Agence France-Presse (AFP) in Brussels on September 10, 2018. AFP

BRUSSELS, Belgium — The European Parliament will vote Wednesday on a contentious copyright law that has pitted news companies and stars like Beatles legend Paul McCartney against Google and the creators of Wikipedia.

The ambitious law has provoked one of the most intense lobbying wars in European Union history.

It is aimed at ensuring creators of content— whether music, movies or news — are paid fairly in a digital world.

The vote will take place at a European Parliament plenary session in the French city of Strasbourg, with a celebrity appearance by Wyclef Jean one of the many side-shows on offer to help sway MEPs.

Rejected in July, the reform has been amended in hope of answering the fears of advocates of internet freedom who helped sink the law.

“The feeling of many in parliament is that on Wednesday we decide the life or death of the law,” right-of-center MEP Marc Joulaud of France, a backer of the measure, told AFP.

The draft law has been sternly resisted by major US tech giants as well as online freedom activists, with some
campaigners warning it could spell the end of viral “memes” or jokes.

Fervently backing it are traditional media and content providers — including AFP— in urgent search of revenue at a time when so much can be seen online for free.

If adopted, MEPs will be able to start negotiations with the EU Council— representing the 28 member states, which already reached a compromise on the issue in May.

These closed-door discussions, which also include the European Commission, are known in EU jargon as “trilogues” and can take several months before any compromise found is put to a fresh vote.

Proponents of the reform would like a law before the European elections in May 2019, when many fear an influx of eurosceptic MEPs with little use for the reform.

“We can still finish on time if the text passes on Wednesday. This is the last slot,” said Joulaud.

The lobbying battle is over two parts of the planned law.

Critics, including several Silicon Valley giants, say the change will lead in effect to blanket censorship of platforms that have become an online hub for creativity as well as the prime source of entertainment— at the expense of TV— for younger generations.

“Let’s put it very bluntly, if the platforms have a liability to make sure that (copyrighted) content doesn’t show up, then anything that could be perceived as a copyright infringement would be taken down,” said Siada El Ramly, the director of EDiMA, a lobby group for the tech sector.

“As an example, if I take a video of my daughter’s dance recital and there is music in the background that would be picked up and taken down,” she said.

The second key provision is Article 11. This would create a so-called “neighbouring right”, meaning that newspapers, magazines and news agencies including AFP would have to be paid a fee when Google or other web services link to their stories.

Europe’s biggest news agencies this month accused Google and Facebook of “plundering” news for free and called on the internet giants to share more of their revenues with the media.

A column signed by the CEOs of around 20 agencies, including Agence France-Presse, backed the law and urged the European Parliament to help address a “grotesque imbalance.” /ee