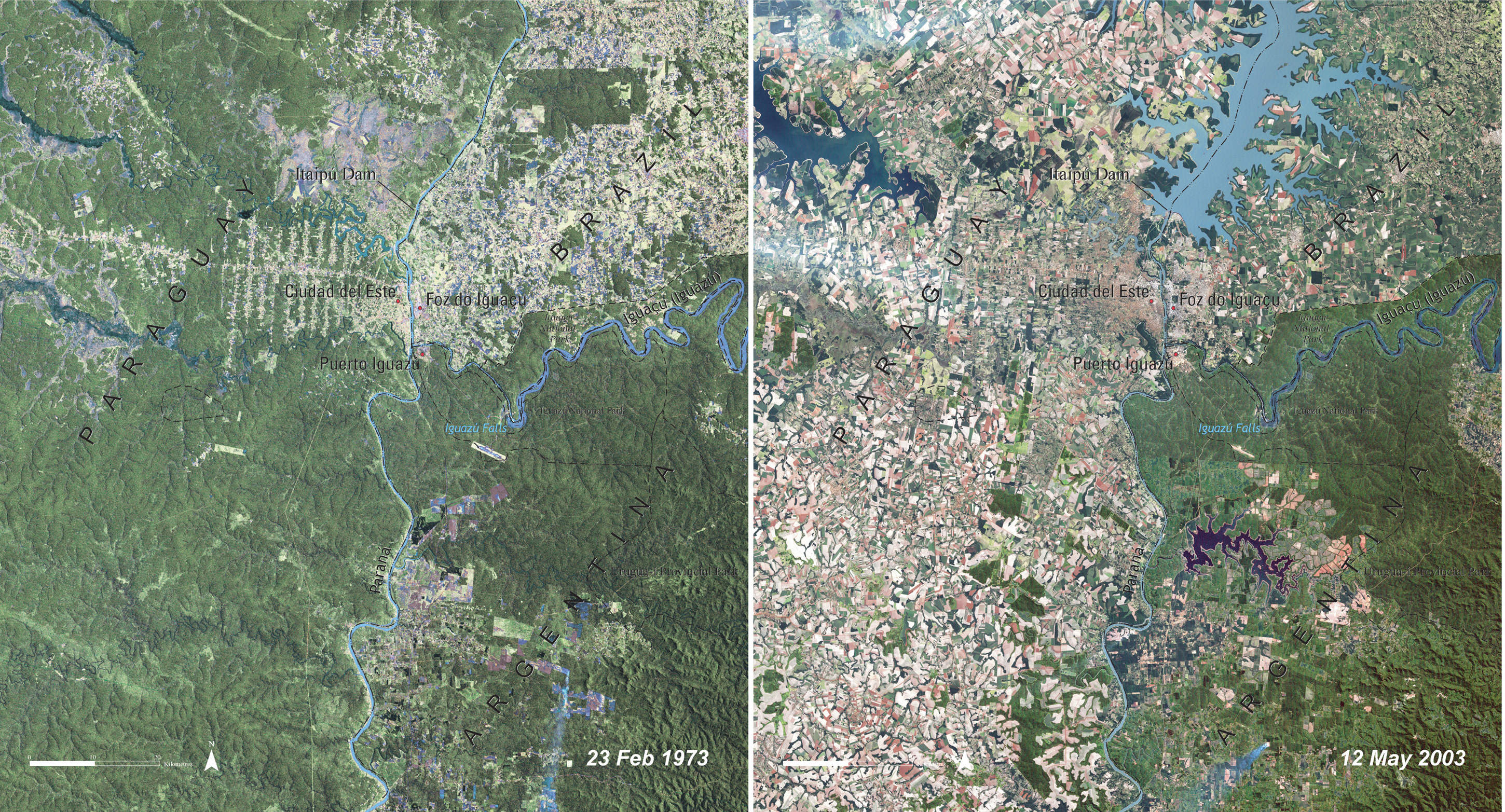 NASA satellite photos taken 30 years apart and published 03 June 2005 by the United Nations Program for the Environment show the destruction of the rain forest in the national park of Iguazu on the Brazilian-Paraguayan border. / AFP PHOTO / UNEP

In the Brazilian state of Para, every week, authorities receive alerts showing them which parts of the Amazon forest have been chopped down, with photos to back it up.

The pictures are taken every day at 10:30 in the morning by American satellites, offering a detailed view of every three to five meters on the ground.

An algorithm helps reveal automatically where logging has taken place.

The authorities send agents to investigate and potentially apprehend the suspects before they do any more damage.

“It used to take six days, sometimes two or three months without images,” said Iara Musse Felix, CEO of SCCON, the company which distributes the alerts.

“Now we have daily images.”

This revolution in forest surveillance, and the Earth in general, comes from a constellation of satellites run by a company called Planet.

Founded in San Francisco in 2010 by three former NASA scientists, Planet is a leader in small satellites, which are easier to produce and replace, and tend to have mission lives of between three and five years.

This economic model is vastly at odds with the traditional aerospace industry, which builds large, sophisticated satellites that are far more powerful but take hundreds of millions of dollars to build.

Planet has placed 298 satellites in orbit since 2013, and half of those were launched last year.

Some 150 are active today, 130 of which are nanosatellites.

The rest have fallen back to Earth and burned up on re-entry to the atmosphere.

These so-called “Dove” satellites are made in San Francisco, at a new building presented this week during the Global Climate Action Summit here.

“One technician can build three Dove spacecraft in a day,” said Chester Gillmore, 33, vice president of manufacturing at Planet.

“You need about 10 tools to build one of our satellites.”

There is no “clean room” here. Visitors walk in and out freely.

Electronic components are brought in on one side of the room, then tested, then assembled.

Doves are a format known as “Cubesat 3u,” including a 30-cm cylinder, equipped with an internal camera and two solar panels which unfold in orbit.

Six completed Doves wait on a cart to be sent to India, where they will be loaded onto a rocket and sent into orbit, some 300 miles (500 kilometers) above Earth.

“And that’s what we mastered, the ability to take the latest chips, and technologies, from other industries like automotive and consumer devices, take the 50 chips that are inside here… and then make them work in aerospace.”

The result is a daily image of every square kilometer of the Earth’s surface, accessible on the Internet.

The company still doesn’t turn a profit. But future opportunities abound for companies that want to launch Earth surveillance across the world, whether to track humanity’s actions on a global scale or to understand the prevalence of drought.

Another project financed by Microsoft co-founder Paul Allen involves surveilling coral reefs. Cameras on board the small Planet satellites allow researchers to see whether they are bleaching, dying, or growing.

When it comes to the Amazon rainforest, illegal loggers know that every day at 10:30 am, the “doves” are watching. /muf