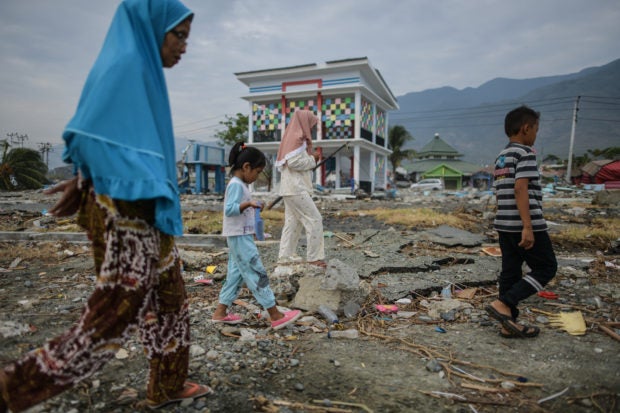 Residents walk through debris in Palu in Indonesia’s Central Sulawesi on October 4, 2018, following the September 28 earthquake and tsunami. The death toll in Indonesia’s twin quake-tsunami disaster passed 1,400 on October 3, with time running out to rescue survivors and the UN warning of “vast” unmet needs that have fuelled looting. AFP

JAKARTA – More than 20 K-pop fandoms in Indonesia are raising funds via online platform kitabisa.com to help earthquake and tsunami victims in Palu and Donggala, Central Sulawesi.

Targeting Rp 5 million (US$329), the fund-raiser is open for seven days and at the time this article was written had gathered Rp 1.8 million.

All donations will be given to ACT Indonesia, which will distribute aid to areas hit by the earthquake and tsunami.

Indonesia’s K-pop fandom previously initiated a fundraiser to help earthquake victims in Lombok, West Nusa Tenggara. The funds collected at the time reached Rp 16.64 million (US$1,100) — exceeding the target of Rp 10 million (US$660).