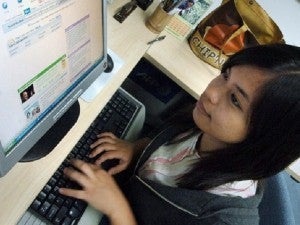 TURNING TO DIGITAL MEDIA. A Filipino student logs on to a website, one of many used to access information. AFP FILE PHOTO

MANILA, Philippines – More Filipinos are using digital media for news and information rather than listening to radio or reading newspapers and magazines, according to a study conducted by TNS, a global research company.

“TNS Digital Life 2012” showed that 45 percent of Filipino respondents connected to the Internet compared to 36 percent who listened to radio, 12 percent who read newspapers, and 4 percent magazines.

The study was based on interviews with 72,000 consumers in 60 countries worldwide from November 2011 to January 2012.

In the Philippines, TNS interviewed 1000 respondents throughout urban areas from the ABCD socio-economic classes.

The study also showed that families of Overseas Filipino Workers (OFWs) in the Philippines used the Internet as the primary communication medium with 81 percent, higher than mobile phones, 77 percent, and landline telephones, 24 percent.

Facebook is the primary social networking site used by 90 percent of families of OFWs to keep in contact with their relatives abroad, the study showed.

The study also showed that Filipinos accessed the Internet mostly through personal computers either at home, 50 percent, or at Internet cafes, 49 percent.

It also noted that there was an increasing number of people accessing the Internet through mobile smartphones at 12 percent.

TOPICS: digital media, Information and Technology, Internet, Media, Research, TNS
Read Next
Tech companies team up to combat email scams
EDITORS' PICK
Garcia softens stance, meets IATF halfway on swab-upon-arrival policy
Want to help local farmers? Shop small and eat Real Food
ICC is everything but a court of ‘white people’
Manila is 78th most expensive city in the world for foreign workers
TeaM Energy pushes development programs to help in pandemic rebound
Piolo Pascual: The Ultimate Heartthrob continues to level up
MOST READ
Sharon Cuneta on living in the US: ‘Nagagawa ko lahat ng normal na bagay’
ICC is everything but a court of ‘white people’
Duterte-Duterte tandem possible but ‘winnability is another question’ — Binay
Mike Nieto asks fans: ‘No below the belt remarks’ toward South Korea
Don't miss out on the latest news and information.