For sale to the highest bidder: A 12-pound chunk of the moon 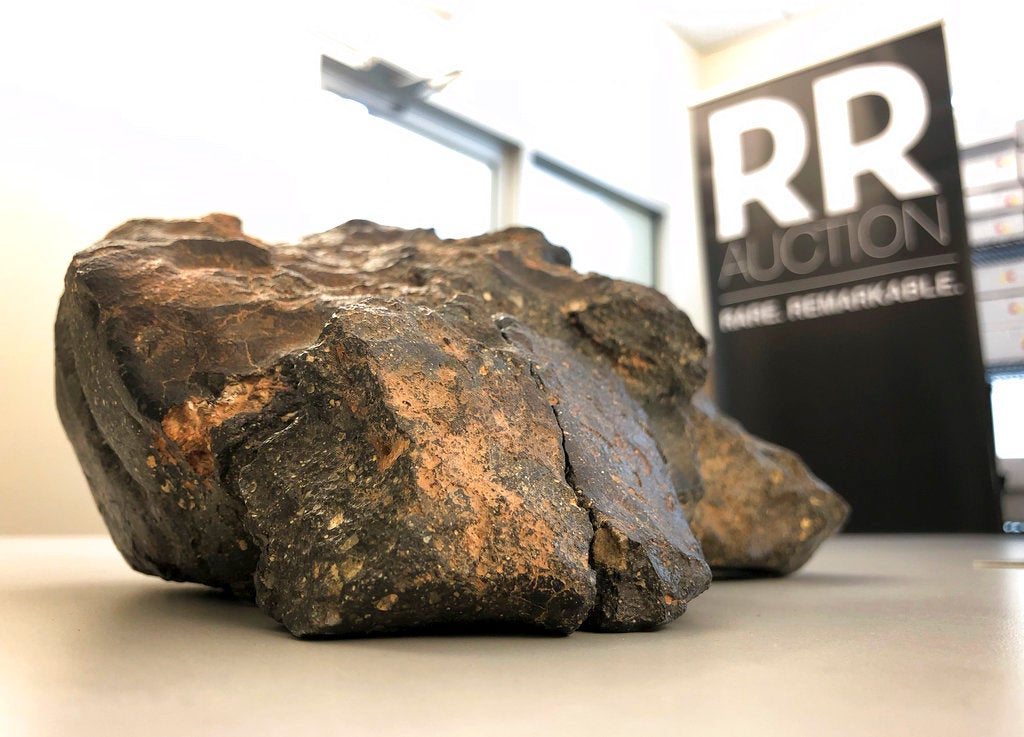 A 12-pound (5.5 kilogram) lunar meteorite discovered in Northwest Africa in 2017 rests on a table, in Amherst, N.H. The rock, which is actually comprised of six fragments that fit together like a puzzle, was found last year in a remote area of Mauritania, but may have plunged to Earth thousands of years ago. The meteorite could sell for $500,000 or more at an online auction that runs from Thursday, Oct. 11, until Oct. 18, 2018. (AP Photo/Rodrique Ngowi)

BOSTON — Anyone who can’t make it to the moon to gather a few lunar rocks now has the opportunity to buy one right here on Earth.

A 12-pound (5.5 kilogram) lunar meteorite discovered in Northwest Africa last year is up for auction by Boston-based RR Auction and could sell for $500,000 or more during online bidding that runs from Thursday until Oct. 18.

It is “one of the most important meteorites available for acquisition anywhere in the world today,” and one of the biggest pieces of the moon ever put up for sale, RR said.

The rock classified as NWA 11789, also known as “Buagaba,” was found last year in a remote area of Mauritania but probably plunged to Earth thousands of years ago.

The meteorite is actually composed of six fragments that fit together like a puzzle. The largest of those pieces weighs about 6 pounds.

Most lunar meteorites found are the size of a walnut or golf ball, said Geoff Notkin, star of television’s “Meteorite Men” and CEO of Aerolite Meteorites, which is selling the rock.

“As soon as we saw this, we knew it was extraordinarily unusual,” he said. “This is close to a once in a lifetime find.”

It is also one the few known lunar meteorites with what experts call “partial fusion crust,” caused by the tremendous heat that sears the rock as it descends through the atmosphere.

“It actually toasted on the outside,” Notkin said.

Another thing that makes it different from most meteorites is that it is “unpaired.” Sometimes different pieces of the same meteorite are discovered at different times, and those examples are known as “paired.” An “unpaired” meteorite is more desirable to collectors and perhaps more valuable to science.

The meteorite would be a nice addition to any natural history museum, but don’t be surprised if a private collector snaps it up, said Robert Livingston, RR’s executive vice president.

“This is the only way a private collector can get their hands on a piece of the moon because the moon rocks brought back by astronauts are U.S. government property,” he said. /muf

TOPICS: auction, Meteorite, Moon, moon rock, Space
Read Next
Google appeals $5 billion EU fine in Android antitrust case
EDITORS' PICK
BFP raises general alarm over Mandaluyong fire
Someone from the Philippines can become $356 Million richer this Tuesday
Cherry Mobile teams up with Cloud Panda PH, launches online store
Leveling up your ‘lutong bahay’ with the kitchen companion you never knew you needed
Bato de la Rosa, Risa Hontiveros back bill increasing female recruitment quota in PNP
Quarantine violations still punishable despite deleted provisions in ‘Bayanihan 2’ – Bato dela Rosa
MOST READ
‘If I had not been SolGen, I will make you eat your words,’ Calida tells Coco Martin
5 car dealership outlets shutting down
51 percent of German firms holding back investments in PH, but not because of COVID-19
Quarantine passes no longer required under GCQ, but curfew remains
Don't miss out on the latest news and information.