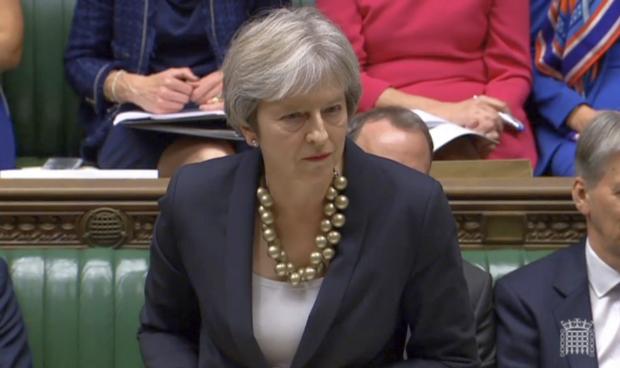 In this image taken from Parliament TV, Britain’s Prime Minister Theresa May makes a statement to the House of Commons about the European Council summit, in London, Monday Oct. 22, 2018. May faces dissent from political opponents and from within her own ruling Conservative Party over her blueprint for the Brexit separation and future relations with the EU. (Photo from Parliament TV via AP)

LONDON — Top scientists from around Europe warned Tuesday that Brexit could leave Britain and the European Union “more insular,” harming research across the continent.

A letter signed by 29 Nobel laureates and six winners of the Fields Medal mathematics prize urged British Prime Minister Theresa May and European Commission President Jean-Claude Juncker to ensure the “closest possible cooperation between the U.K. and the EU” after Britain leaves the bloc.

The letter said scientific innovation “requires the flow of people and ideas across borders to allow the rapid exchange of ideas, expertise and technology.”

“Creating new barriers to such ease of collaboration will inhibit progress, to the detriment of us all,” said the signatories, who include biologist Venki Ramakrishnan and economist Christopher Pissarides.

The London-based Francis Crick Institute, the biggest biomedical research lab under one roof in Europe, also warned that a “hard Brexit” that put up barriers to the flow of people, goods and services would be detrimental to British science.

Crick director Paul Nurse, who shared the 2001 Nobel Prize in medicine for his cancer research, said “the overwhelming negativity of scientists towards a hard Brexit should be a wake-up call.”

“We need a deal that replaces the science funding lost because of Brexit, that preserves freedom of movement for talented scientists, and that makes them feel welcome in this country,” he said.

The British government says it is seeking “an ambitious relationship on science and innovation with our EU partners” after Brexit. But the details of new arrangements will not be worked out until after the U.K. leaves the bloc in March.

The two sides hope to have the outlines of a deal on future relations in place by then. But with divorce negotiations stuck on the unresolved issues of the Irish border, fears are growing that the U.K. could crash out without an agreement, leading to chaos at ports and major economic disruption.

“There isn’t absolute certainty now, which I would love to be able to give,” U.K. Science Minister Sam Gyimah said Tuesday. “But what I can say is we are aware that, if we want to be the go-to place for science — which is our ambition as a nation — then mobility and reducing friction has to be a key part of that.” /atm