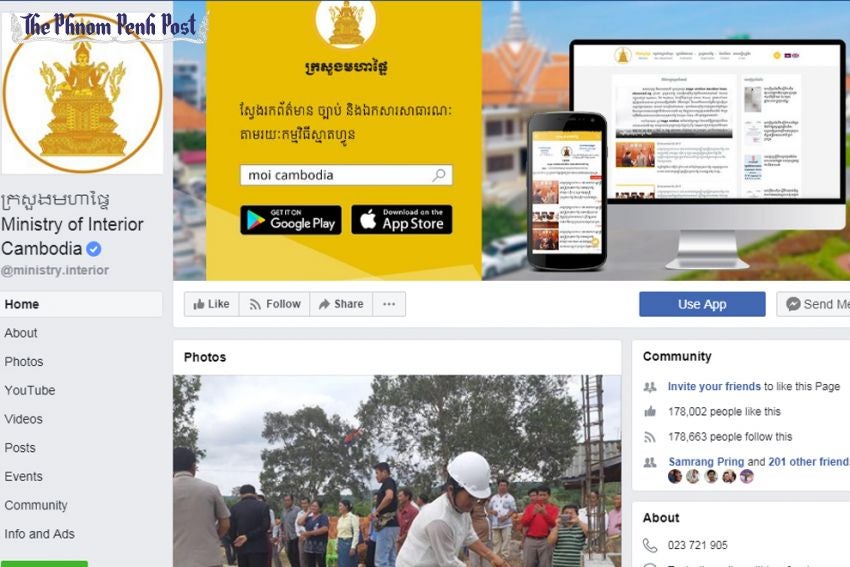 PHNOM PENH — The Ministry of Interior has announced the closure of six Facebook accounts, which it said had incited insecurity in Cambodia.

The announcement was published in the Khmer language on the ministry’s website.

It said the closure followed the ministry’s investigation and complaint to Facebook against some groups who had “falsified news” online.

A total of six accounts have been shut down, three of which were named after Hun Manet, the Royal Cambodian Armed Forces commander.

Another account was called Vong Bunintreavuth while the other two had a similar name – Khmer Vietnamese Association in Cambodia.

In July, the ministry’s information technology department asked Facebook to investigate the Vietnamese Association of Cambodia after it posted falsified news, calling on Vietnamese nationals to vote in the July 29 national election.

The ministry said some people had taken advantage of the freedom offered by the likes of Facebook – which it claimed to be the most popular social media site among Cambodians and government officials – to “serve their dishonest interests”.

In addition to the closure announcement, the statement also disclosed 10 verified accounts, all of which represented Cambodian government institutions and several of its officials.

The Information Technology department has pledged to continue cracking down on more fake accounts and to resume verifying official accounts in order to “prevent lies from spreading among people”.