For many Indonesians, 'Fesbuk' is the only Internet | Inquirer Technology
Close
menu
search

For many Indonesians, ‘Fesbuk’ is the only Internet 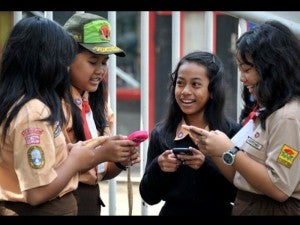 Indonesian school children open Facebook on their mobile devices in Jakarta on February 2, 2012. After a deep slump that soured many investors on tech stocks last year, Facebook is launching its IPO into a market that looks ready to greet the social networking giant with open arms. Facebook, founded in 2004 by Mark Zuckerberg, then a 19 year old Harvard student, filed documents with the Security and Exchange Commission to go public, seeking to raise $5 billion in its initial stock offering. AFP PHOTO / Bay ISMOYO

JAKARTA—Indonesia, a developing Muslim nation which claims the world’s third-largest community of Facebook users, has become a showcase for the social networking site’s global power and reach.

Facebook has broken technological and social barriers to connect 40 million users in the sprawling Indonesian archipelago of more than 17,000 islands, some without even landline connections.

Its remarkable ascent has for many users rendered the rest of the Internet obsolete, as well as attracted allegations that it is responsible for encouraging pornography, premarital sex and adultery.

Banking on its global popularity, which has also seen India amass the second-biggest number of users after the United States, Facebook has filed for a stock market debut expected to become one of the biggest of all time.

With even cheap cell phones in Indonesia sold already bundled with Facebook applications, for many, “Fesbuk” — as it is written in the national Bahasa language — simply is the Internet.

“Since access to Facebook is made so easy by pressing one button on a mobile phone, many people who are not familiar with the Internet do not realise that Facebook is part of the Internet,” said Danny Oei Wirianto, co-founder of homegrown social networking site MindTalk.

Many don’t bother to do anything else on the Internet and are barely aware that they can use the browser button on their phone to go online, he explains.

Their low cost and ease of access has enabled almost 17 percent of the population to use Facebook, making it a cheap past time in a country where the majority live on less than $2 a day.

The Internet “is the cheapest form of entertainment here,” said Daniel Tumiwa, country manager of Multiply, Facebook’s runner-up in Indonesia which in the face of the juggernaut has reinvented itself as an e-commerce network.

Facebook games are a major drawcard for users, with a survey showing that 65 percent of traffic is directed to them, Wirianto said.

In recognition, Rovio — the company behind the smash-hit Angry Birds — has chosen the Indonesian capital Jakarta for the game’s much-anticipated worldwide launch on Facebook this Valentine’s Day.

“It’s the Facebook capital of the world,” Peter Vesterbecka, Rovio’s Asia-Pacific manager, said recently in the capital Jakarta, which has more Facebook users than any other city in the world.

But in the world’s most populous Muslim nation, known for its strong religious and cultural beliefs, Facebook is not all fun and games.

Indonesians are learning everything from English to the Koran through Facebook groups, and perhaps more than any other Internet tool the site is helping Indonesians interact and express views that were once taboo.

Facebook group “Gay Indonesia Only!” with more than 8,000 members is a forum for homosexuals to meet and interact online.

“It’s easier for us to educate people about homosexuality through Facebook than face-to-face,” said Sri Agustine, head of Ardhanary Institute, an advocacy group for lesbian, bisexual and transgender rights.

“We even have Muslim extremists among our Facebook friends,” she said.

Facebook’s ability to smash through social norms has raised the ire of Islamic clerics, who have called for a ban, arguing it allows improper mingling between the sexes and encourages pornography and illicit sex.

“But accounts that promote negative lifestyles, pornography and atheism should be banned.”

“I use it to share information about Islam and also organise protests,” he said of his own Facebook page, which boasts the maximum 5,000 friends.