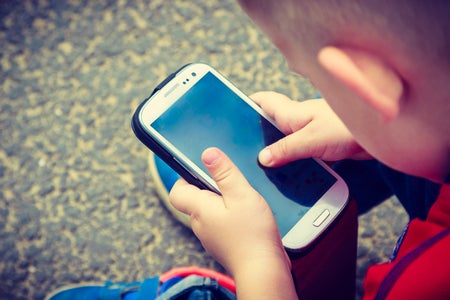 A new study shows that when it comes to mobile apps catering to young children, most contained advertising that exhibited “manipulative and disruptive methods” — regardless if the apps were labeled educational or otherwise.

The study, which was published Oct. 26 on the Journal of Developmental and Behavioral Pediatrics, saw the researchers examining the prevalence of advertising in children’s apps.

Young children, as per the study, use mobile devices one hour a day on average. And yet no studies in the past have attempted to examine just how widespread advertising in the children’s apps were, as well as the possible underlying dangers that these ads pose.

The researchers from the University of Michigan Medical School reviewed 135 children’s apps and found that 95 percent contained at least one type of advertising. The ads used commercial characters, full-app teasers and advertising videos that interrupted play, while others were solely for in-app purchases.

Distracting ads such as banners across the screen and hidden ads with misleading symbols were also used in the children’s apps. Moreover, it was found that the ads were more prevalent in free apps compared to paid apps, but “occurred in similar rates in apps labeled as ‘educational’ versus other categories.”

“In this exploratory study, we found high rates of mobile advertising through manipulative and disruptive methods,” the study read. “These results have implications for advertising regulation, parent media choices, and apps’ education value.”

The study’s findings came to the support of a number of child advocacy groups in the United States that banded together under the Campaign for a Commercial-Free Childhood, to call for an investigation on children’s apps.

In a letter sent to the U.S. Federal Trade Commission on Oct. 30, the advocacy groups asked that a probe be done on the children’s apps, since the advertising practices exhibited were unfair and deceptive to children and parents.

“It is deceptive to young children to disguise ads as being part of a game or to made ad viewing an essential part of game play,” the letter read. “Preschool children are vulnerable to advertising and benefit from clear separation of ads and programming content… [Young children] lack a meta-awareness about advertising and are unable to critically reflect upon their reactions to it.” JB