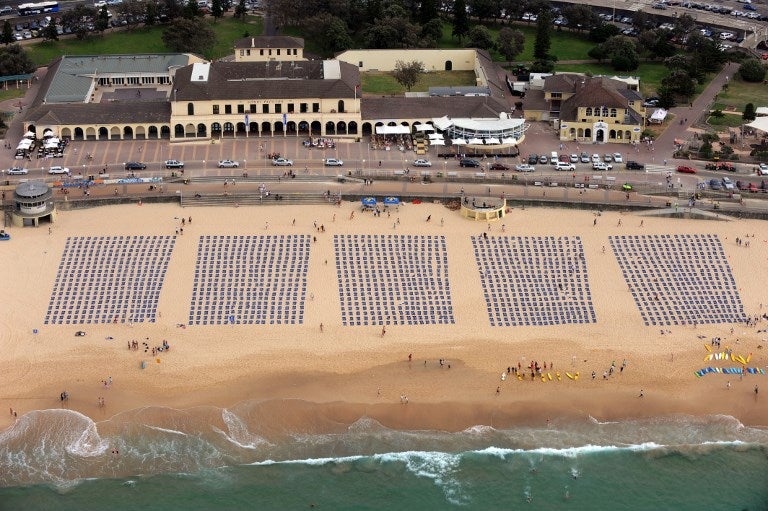 This aerial photo of 1,700 beach towels each bearing a chalk outline of a ‘dead body,’ symbolizing the annual toll of skin cancer related deaths in Australia, laid out by the Cancer Council on Bondi Beach in Sydney on November 15, 2009. The event was designed to raise awareness about the dangers of tanning in Australia where almost half of teenagers still believe a tan looks healthy. AFP FILE

PARIS, France – Skin cancer deaths among men have soared in wealthy nations since 1985, with mortality rates among women rising more slowly or even declining, researchers told a medical conference in Glasgow Sunday.

Reasons for the discrepancy between sexes are unclear but evidence suggests men are “less likely to protect themselves from the sun” or heed public health warnings, lead researcher Dorothy Yang, a doctor at the Royal Free London NHS Foundation Trust in London, told AFP.

More than 90 percent of melanoma cancers are caused by skin cell damage from exposure to the sun or other sources of ultraviolet (UV) radiation such as tanning beds, according to the US Centers for Disease Control (CDC).

In two nations — Ireland and Croatia — it roughly doubled.

Also seeing a sharp jump were Spain and Britain (70 percent), The Netherlands (60 percent), as well as France and Belgium (50 percent).

In the United States, which was not included in the study, male melanoma mortality went up by about 25 percent, according to CDC statistics.

But the nations with the biggest rise in skin cancer deaths were often not with the most elevated mortality rates, the new research showed.

In Australia, for example, nearly six of every 100,000 men succumbed to the disease in 2013-15. That is twice the second highest death rate (Finland), but only a 10 percent increase compared to 30 years earlier.

“Australia has been an early implementer of public health media campaigns since the 1970s to promote ‘sun-smart’ behavior,” Yang told AFP by phone before presenting her data at the 2018 UK National Cancer Research Institute Conference.

While debate continues as to how much of Australia’s record skin cancer rate stems from depletion of UV-filtering ozone in the stratosphere, 30 years of public health campaigns have no doubt made Australians acutely aware of the dangers.

The so-called “ozone hole” was especially big over Australia when the efforts kicked off.

Skin cancer deaths among women in 1985 in Australia occurred at half the rate as for men, and declined by 10 percent over the next 30 years, Yang and three colleagues reported.

Other countries where female mortality from the disease went down over the same period are Austria (nine percent), the Czech Republic (16 percent), and Israel (23 percent). In several other nations — Romania, Sweden and Britain — there were slight increases.

Scientists are investigating whether biological or genetic factors might also play a role in skin cancer, but findings so far are inconclusive, Yang said. /cbb