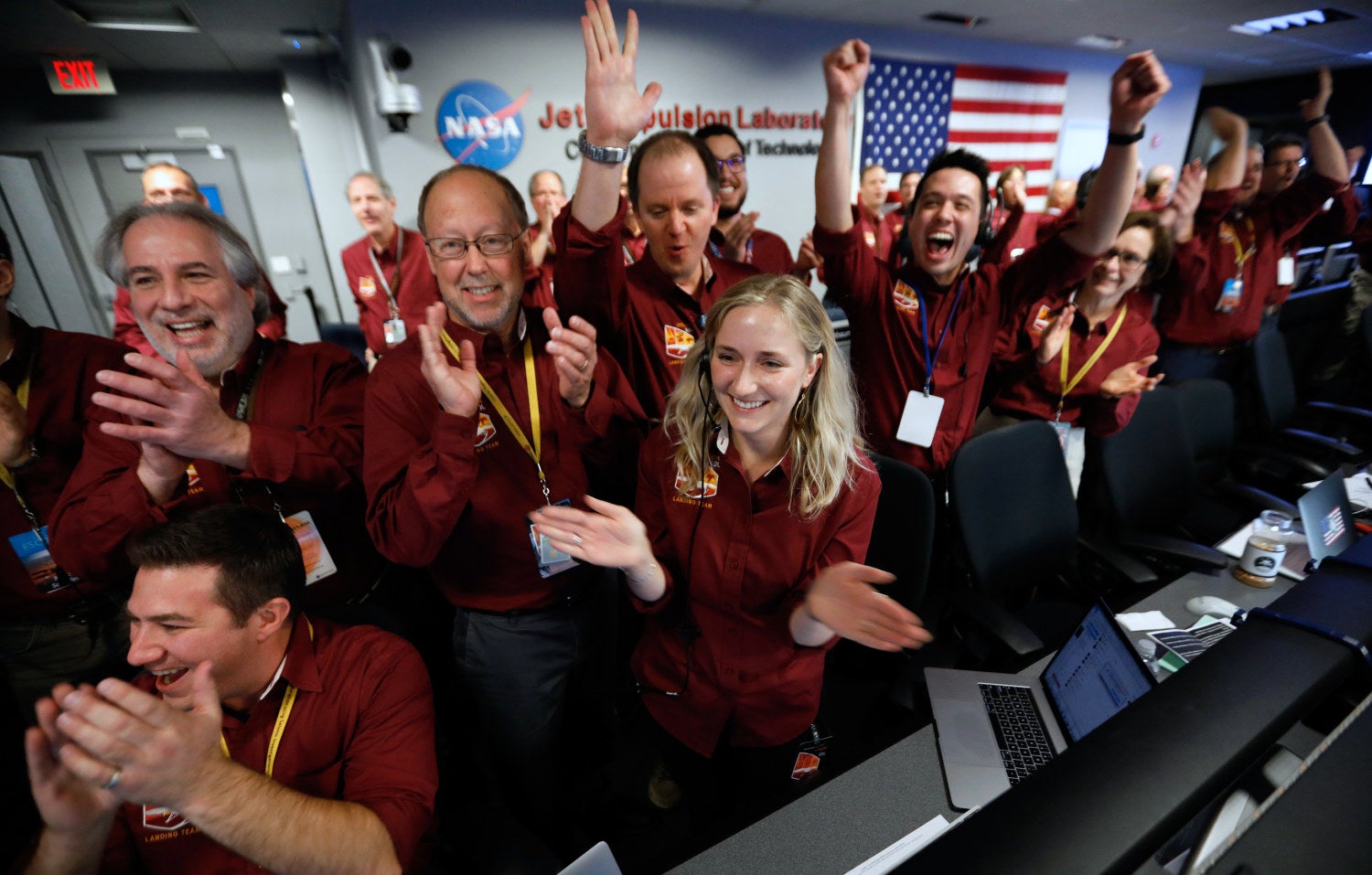 NASA engineers celebrate the InSight spacecraft’s successful landing on the planet Mars from the Mission Support area in the Space Flight Operations facility at the NASA Jet Propulsion Laboratory in Pasadena, California, on November 26, 2018. AFP

PASADENA, United States – Cheers and applause erupted at NASA’s Jet Propulsion Laboratory on Monday as a waist-high unmanned lander, called InSight, touched down on Mars, capping a nearly seven-year journey from design to launch to landing.

The dramatic arrival of the $993 million spacecraft — designed to listen for quakes and tremors as a way to unveil the Red Planet’s inner mysteries, how it formed billions of years ago and, by extension, how other rocky planets like Earth took shape — marked the eighth successful landing on Mars in NASA’s history.

“Touchdown confirmed,” a mission control operator at NASA said, as pent-up anxiety and excitement surged through the room, and dozens of scientists leapt from their seats to embrace each other.

“It was intense and you could feel the emotion,” said NASA administrator Jim Bridenstine, in an interview on NASA television afterward. 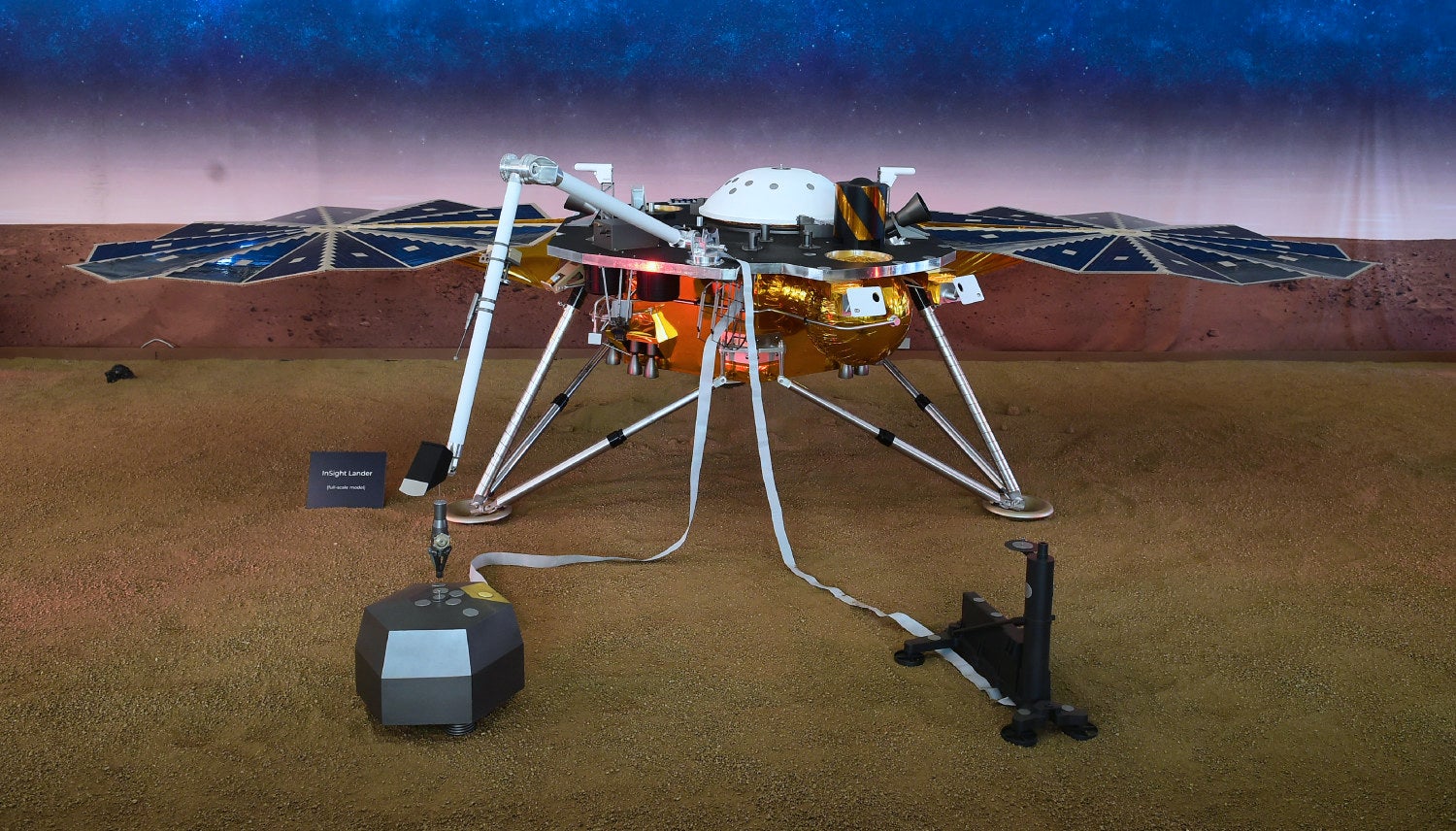 A replica of the InSight Mars Lander is on display at the NASA Jet Propulsion Laboratory in Pasadena, California on November 26, 2018, as excitement builds ahead of today’s scheduled noontime (PST) landing of the spacecraft. AFP

The vehicle appeared to be in good shape, according to the first communications received from the Martian surface.

But as expected, the dust kicked up during the landing obscured the first picture InSight sent back, which was heavily flecked.

“Here’s a quick-and-dirty attempt at processing out distortion in the first image from InSight,” Emily Lakdawalla, senior editor at the Planetary Society, wrote on Twitter.

“It does look like the lander is a bit tilted, which is not ideal, but the workspace looks flat as a pancake and nearly rock-free.”

The principal investigator on the French seismometer, Philippe Lognonne, said he was “relieved and very happy” at the outcome.

“I’ve just received confirmation that there are no rocks in front of the lander,” he told AFP.

Next, InSight must open its solar arrays, as NASA waits until later in the afternoon to learn if that final, crucial phase went as planned.

The spacecraft is meant to be solar-powered once it reaches the surface of Mars.

A post-launch press conference is planned for 2200 GMT.

The spacecraft is NASA’s first to touch down on Earth’s neighboring planet since the Curiosity rover arrived in 2012.

More than half of 43 attempts to reach Mars with rovers, orbiters and probes by space agencies from around the world have failed.

NASA is the only space agency to have made it, and is invested in these robotic missions as a way to prepare for the first Mars-bound human explorers in the 2030s.

The nail-biting entry, descent and landing phase began at 11:47 am (1940 GMT) at NASA’s Jet Propulsion Laboratory in Pasadena, California, home to mission control for Mars InSight, and ended one second before 1953 GMT.

A carefully orchestrated sequence — already fully preprogrammed on board the spacecraft — unfolded over the following several minutes, coined “six and a half minutes of terror.”

Speeding faster than a bullet at 12,300 miles (19,800 kilometers) an hour, the heat-shielded spacecraft encountered scorching friction as it entered the Mars atmosphere.

The heat shield soared to a temperature of 2,700 Fahrenheit (about 1,500 Celsius) before it was discarded, the three landing legs deployed and the parachute popped out, easing InSight down to the Martian surface.

The German Aerospace Center (DLR) provided a self-hammering mole that can burrow 16 feet (five meters) into the surface — further than any instrument before — to measure heat flow.

Three of InSight’s seismic instruments were designed and built in Britain.

Other significant contributions came from the Space Research Center of the Polish Academy of Sciences and Astronika and the Swiss Institute of Technology.

“It is wonderful news that the InSight spacecraft has landed safely on Mars,” said Sue Horne, head of space exploration at the UK Space Agency.

By listening for tremors on Mars, whether from quakes or meteor impacts or even volcanic activity, scientists can learn more about its interior and reveal how the planet formed.