Facebook was warned of alleged Russian meddling back in 2014 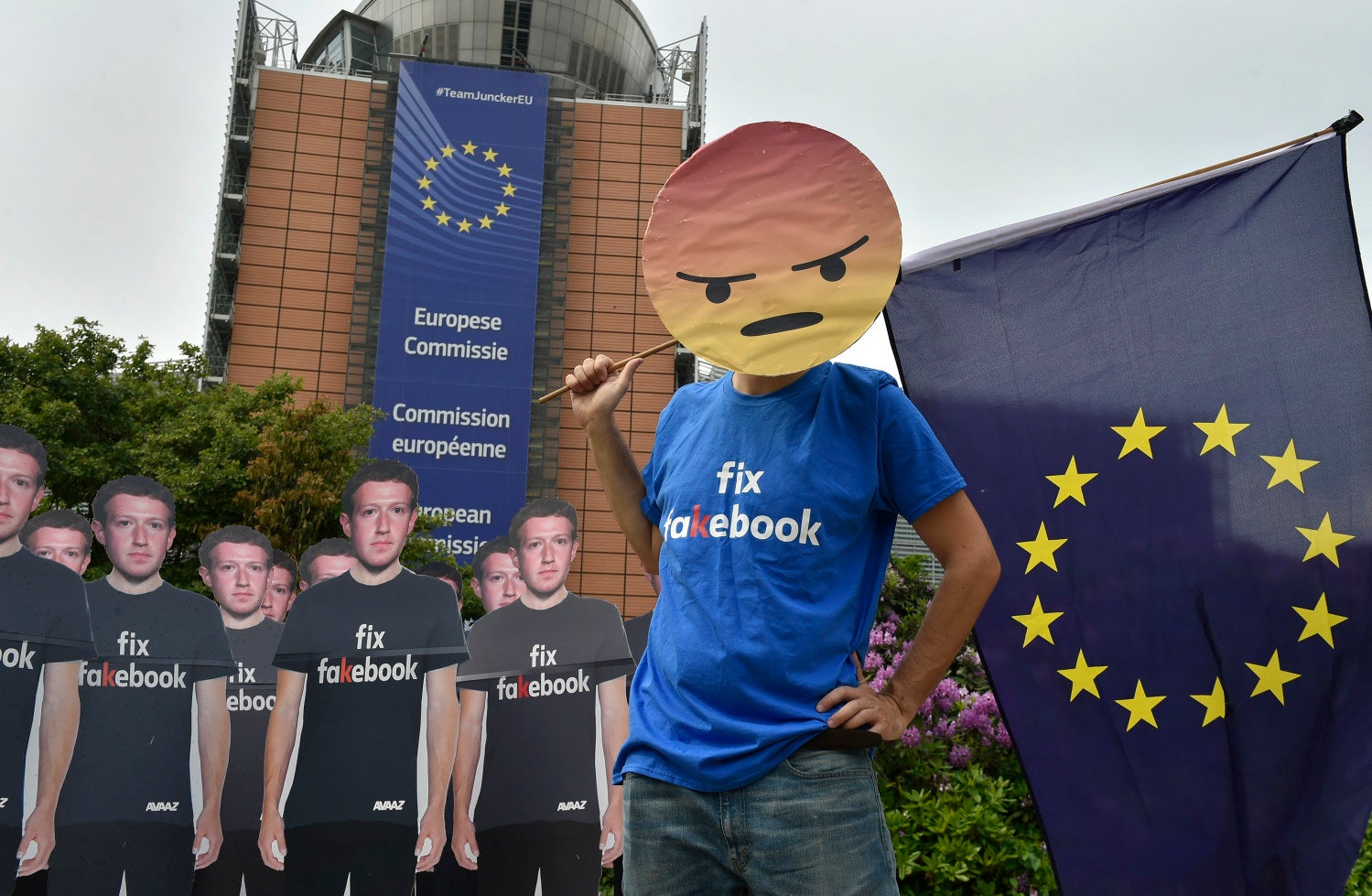 Global activists of Avaaz, set up cardboard cutouts of Facebook chief Mark Zuckerberg, on which is written ‘Fix Fakebook,’ in front of the European Union headquarters in Brussels, on May 22, 2018, as they call attention to what the group says are hundreds of millions of fake accounts still spreading disinformation on Facebook. AFP

LONDON, United Kingdom – Facebook acknowledged on Tuesday that its engineers had flagged suspicious Russian activity as early as 2014 — long before it became public — but did not confirm evidence of a coordinated campaign.

The revelation came as the British Parliament held hearings featuring lawmakers from nine countries into how the social media behemoth was being used to manipulate major election results.

Facebook chief executive Mark Zuckerberg refused to attend the meeting and organizers pulled up an empty chair in front of a spot with his nameplate at the shoehorn-shaped table in the House of Commons committee room in London.

Zuckerberg’s company is reeling from a series of crises linked to its handling of alleged Russian meddling in both the 2016 US presidential election and that year’s British referendum on leaving the European Union.

The emails were seized from the now-defunct US software provider Six4Three under a rarely used UK parliamentary enforcement procedure.

Six4Three is suing Facebook and the emails cited by Collins have been sealed by a California court. He did not release their content on Tuesday.

Facebook argued on Tuesday that the emails referred to by Collins were taken out of context.

“The engineers who had flagged these initial concerns subsequently looked into this further and found no evidence of specific Russian activity,” Facebook said in a statement provided to AFP.

It was unclear from the company’s wording if its engineers found no evidence of suspicious activity or whether that activity could not be linked directly to Russia.

Collins appeared flustered as he tried to get Facebook’s attending vice president Richard Allan to explain what exactly happened in 2014.

“If Russian IP addresses were pulling down a huge amount of data from the platform was that reported or was that just kept, as so often seems to be the case, within the family and not talked about?” Collins asked.

Allan responded by saying: “Any information you have seen… is at best partial and at worst potentially misleading.”

The Facebook executive added that the emails were “unverified partial accounts”.

An investigative piece published last week by The New York Times said Facebook misled the public about what it knew about Russia’s meddling in the US campaign.

The story added that Facebook executives then used a PR firm to spread negative stories about other Silicon Valley companies and deflect anger away from itself.

Facebook ended its contract with the PR company days after the article’s publication.

Former US Secretary of State Hillary Clinton has cited Russian campaign interference as one of the factors that helped tip the presidential race in Donald Trump’s favor.

“We did spot this activity that was wrong, shouldn’t have happened, was political activity directed from Russia,” said Allan.

But he added that the crux of the problem was campaign spending.

He also appeared unable to placate committee members’ anger at  Zuckerberg’s refusal to show up.

“Who advised Mr. Zuckerberg?” asked Canadian politician Charlie Angus. “Was that his decision or did Facebook say — to protect Mr. Zuckerberg — to stay away from this meeting?”

“I will take responsibility for decision-making around appearances,” Allan replied. /cbb